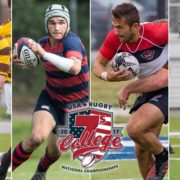 LAFAYETTE, Colo. – The Men’s Division I bracket will kick off the 2017 USA Rugby College 7s National Championships Friday, May 19, from Infinity Park in Glendale, Colo., while the Men’s Division II and Women’s fields will get underway the following morning.

Bowling Green might be the most likely team from Pool A to advance to the Cup rounds. Last year the Falcons nearly reached the Cup Quarterfinals after posting a 2-1 pool record. Missing out on the top-eight last year did not slow down Bowling Green, though, as the team won its three games after pool play to complete a 5-1 record at the 2016 College 7s National Championships.

One of Bowling Green’s five wins came against James Madison. The Dukes, who won the 2015 Men’s Division II College 7s National Championships, have been more than competent competing at Division I since their Cup Final victory two years ago. In the fall, James Madison reached the Quarterfinals of the D1AA Fall Championship.

After winning the Empire Conference 7s Championship for a second consecutive year, Fordham hopes to improve on its results from last year’s College 7s National Championships. The Rams staggered to a 1-4 record last spring, but its one win was an impressive, 19-0, shutout of Wyoming.

Lindenwood University’s prowess in sevens earned the Lions their first National Championship in 2015 at the College 7s National Championships at the University of Denver. A loss to Arizona State in last year’s Cup Quarterfinals ended Lindenwood’s chances as repeating as champion after going 3-0 in pool play. A return to the Centennial State could boost the Lions’ chances of winning a second National Championship, though. Not only did their trophy-raising win two years ago occur in Colorado, but Lindenwood also won the Red Bull 7s this past August at Infinity Park – the same site as this weekend’s championship event.

Grand Canyon University might have the best shot of overtaking Lindenwood in Pool B. Not only did the Lopes win the Plate at the West Coast 7s and the Las Vegas Invitational, but Head Coach Cam Wyper was the lead man in charge when the Lions won it all in 2015.

Wyoming’s first appearance at the College 7s National Championships did not go as planned. The Cowboys managed one win, but have been given a chance to redeem themselves this weekend after winning the Rocky Mountain 7s.

Three teams from D1A Rugby occupy Pool C. The lone squad from outside D1A Rugby, Florida International, makes its first College 7s appearance after winning the conference championship in sevens out of the South Independent Conference.

Arkansas is the only team in the entire Men’s Division I field that won multiple qualifying events. The Razorbacks won the Big 12 Championship in February before taking home the title in last month’s Red River Conference Championship.

Ohio State has been taking its sevens very seriously for a number of years now. After winning the Big Ten Universities Conference 7s Championship, the Buckeyes will now eye their first National Championship.

California Conference’s Santa Clara will be making the trip to Denver. The Broncos hosted and fended off a spirited group at the second rendition of the Jesuit Cup, which included Rugby East’s Wheeling Jesuit University.

After reaching the Cup Final in 2015, Davenport University got as far as the Cup Semifinals last year before falling to American International College, 17-5. Interestingly enough, it was AIC that knocked out the Panthers in the Cup Semifinals of their most recent sevens tournament – the Heart of America Classic. AIC went on to win the event, but no team at the tournament made the Yellow Jackets work harder than Davenport, which lost 10-5.

Davenport ended Utah’s College 7s run in 2015 with a 24-20 win in the Cup Quarterfinals. The Utes did not compete in last year’s National Championship event, but have their eyes set on a return to the Cup rounds after third-place finishes at the Red Bull 7s and PAC-12 7s Conference Championship.

Texas A&M missed out on the Cup Quarterfinals despite posting a 2-1 pool record in 2016. The Aggies forged ahead to earn two more wins to finish with a 4-2 record at last year’s championship event. Red River Conference’s Texas A&M will have a chance to avenge its lone pools loss from year ago when it faces Davenport.

Kansas State showed well at the Heart of America Classic, but eventually fell to Davenport in the Cup Quarterfinals. The Wildcats will be determined to reverse that result this weekend against the Panthers.