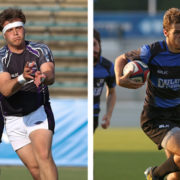 LAFAYETTE, Colo. – Minnesota-Duluth and Wisconsin-Whitewater are set to return to Furman University for the Men’s Division II National Championship weekend for the third consecutive year. The two now storied programs have faced off in the DII title game each of the past two years, but before they can make it a third straight Championship fixture between the two, the Fighting Penguins and Warhawks will need to get past Furman University and Norwich, respectively, in the Dec. 3 National Semifinals that will be broadcasted on The Rugby Channel.

Minnesota-Duluth has been its usual dominant self this fall, tearing through the Northern Lights competition without much resistance. The Fighting Penguins torrid pace was slowed just a bit during the Nov. 19-20 Midwest Regional. Round of 16 and Quarterfinal wins over Colorado School of Mines and North Dakota State didn’t exactly go down to the wire, but the average scoring margin of 19 points made for much tighter affairs than the team had experienced in previous Playoff results.

The Duluth coaching staff admits that it made for more stress in the coaching box, but they are pleased to see the challenge of reaching the Championship rounds made more difficult thanks to the Division II landscape becoming more competitive.

“We’re very happy with the results from the [Regional] Playoffs,” said coach Mary Swanstrom. “The better the teams are, the better Division II will be doing, and it improves rugby in the USA, in general. Having hard competition tells me that rugby is growing, and we’re happy to see that.”

Duluth’s rarely matched consistency stems from a commitment to fitness, players’ dedication to spend their free time recruiting some of Minnesota’s top high school players, and the a non-negotiable level of intensity during every single training session.

“We try to keep a very high level of intensity at all of our practices so it’s not as big of a shock when we get to a big game,” Swanstrom explained.

Furman, which must contend with Minnesota-Duluth in the Semifinals, has its own theory as to why Saturday’s opponent has been unbeatable the past few years. The Paladins coaching staff sees a team that distributes the ball well, never stops communicating and makes the right decision more times than not.

“Duluth does all of those well,” complimented Furman’s lead man John Roberts. “The ball does not stay on the deck long, they have playmakers throughout the line and their No. 10 is outstanding – he runs the show.”

But like the rest of the Division II competition, Duluth is an improving team, as well. In no area have the Fighting Penguins gotten better this season than in the set scrum. Thanks to the hard work from the team’s tight five, in particular, an area of Duluth’s game that was in question back in September is now a strength heading into the Championship weekend.

Interestingly enough, Furman, had an easier time with its Regional Playoff wins over Sacred Heart and North Carolina State.

“I think we put together our best overall match against NC State in the South Regionals,” said Roberts. “We have tended to start real strong, build a big lead and lapse on defense by the time the outcome is decided. We won’t have that luxury this week.”

The Paladins have the extremely tough task of facing the reigning three-time National Champions, but at least they have the comfort of playing them on home soil. Furman is hosting the Fall Championships for a third time in as many years, and its players have had a front row seat to Minnesota-Duluth’s previous two National Championship runs.

“Getting to the final four has been a singular goal for our squad for the past three years. As tournament hosts, our players have watched the very best teams compete on their pitch. They know what a championship team looks like and have worked hard to get to this point.

“The team, our fans, our community are incredibly excited about the weekend. Playing for a National Championship on your home turf is an unparalleled opportunity, and I know we are going to do our best. We’ll be a tough out on our own campus.”

In order for Furman to contend with the Fighting Penguins, it will need to contain Trace Bolstad. The All-American fly half has been starting in the No. 10 jumper for a number of years now, and won’t be rattled easily. Still, even if the Paladins do a good job of preventing Bolstad from distributing the ball to the likes of playmakers Matt Martin and Randy Tanaka, he still has a strong, accurate and well-timed boot that can put Furman under pressure, as well.

2016 has been a season of firsts for the Cadets. Its Oct. 29 win over Vermont clinched the program’s very first New England Collegiate Rugby Conference title. Two weeks later, a 72-33 blowout of New Hampshire solidified a perfect 8-0 conference record before Norwich thumped Bentley, 30-17, to advance to its first-ever National Quarterfinal.

In the Round of 8 fixture against Rowan, the Cadets followed the lead of its eight man, Eric Pierone, who notched a hat trick in the 38-22 victory.

“He’s a tough Marine and plays with that kind of mentality that you’d expect from a Marine,” Weggler said of Pierone.

Weggler’s hard-noised coaching style fits the demeanor of Pierone and the rest of the Cadets, with the team’s longtime coach simple stating, “that’s the way we go about business.”

Wisconsin-Whitewater wouldn’t want to face any other type of opposition. While the team’s results out of the Wisconsin-Illinois Conference are often one-sided, the teams in the competition – regardless of record – enjoy the physical aspect of the sport, and it serves the Warhawks well in terms of thickening their skin for postseason runs into December.

“Coming out of the WIIL Conference, we have played a lot of rugby against some outstanding teams,” said Whitewater coach Matt Pederson. “While the score lines might not reflect great games, they are hard-hitting and we have to work each week to earn those victories.”

An average of just eight points has separated Wisconsin-Whitewater and Minnesota-Duluth in the last two Championship Finals. Duluth’s ability to win the big game has shined a light on the team’s relentless pursuit of perfection, but the Warhawks consistent winning tradition over the past few years has been no less impressive.

“We maintain a positive team environment that is inclusive to all players, no matter what level they are, be it first or second-side players,” Pederson said of the program’s elements that drive its success. “We stress that every player is going to bring something positive to the team.”

Of course, even in the world’s most team-oriented sport there are standouts. Up front, Ken Ewert and Brandon Lopez are outstanding props. Those two are a big help in establishing the platform for All-Americans Eric Pachowitz and Aec Treuthardt to work their magic in the backline.

“We saw a bit of Norwich in Pittsburgh, but who knows what a team could do in those conditions,” noted Pederson. “We can expect a focused, disciplined and fit team. They will be well coached and play within their system.”

Norwich doesn’t have the Championship weekend experience that Wisconsin-Whitewater possesses, but the team hasn’t let any moment get too big over the course of its undefeated season.< /p>

“This particular group works well as a team and nothing really seems to phase them,” said Weggler. “They didn’t show any nervousness in Pittsburgh, so I assume when we get to South Carolina we’ll just play rugby as usual.”

In the Men’s DII Semifinals, Norwich and Wisconsin-Whitewater will take the first crack at advancing to the title game when they go head-to-head Saturday starting at 9 a.m. ET. Furman and Minnesota-Duluth are slated for the second of four Fall Championship fixtures and are scheduled to kickoff at 11 a.m. ET.

The winner of Saturday’s Semifinals will contend for the 2016 Men’s Division II National Championship the following day beginning at 1 p.m. ET. Both the Semifinals and the Championship Final will air free of charge on The Rugby Channel.