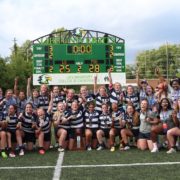 The Lions of Missouri fancied their chances throughout the match with the majority of their possession coming in their own end, but had too much to do against the perennial-champion Nittany Lions in the second half. Both teams will join D1 Elite Semifinalist Life University and DI Spring Championship University of California, Davis, at the 2017 USA Rugby College 7s National Championships May 19-21.

The teams traded early breaks in the first couple of minutes before Penn State broke the try line from Lindenwood penalties. The Lions conceded one too many with an infraction at the 22 and Corinne Heavner and capped Women’s Eagle Kayla Canett freed international Tess Feury for the 5-0 lead after four minutes.

Lindenwood found time with the ball with a patient attack through the 10th minute when McKenzie Hawkins slotted a penalty kick for a 5-3 score. The Lions botched the restart but were not punished on the scoreboard as Feury missed the chance at points. Knowing their opportunities may be limited against a strong Penn State team or banking on their confidence, the Lions attacked from their own try line. Hawkins had enough when the Nittany Lions were penalized in the 20th minute, but her kick to touch stayed in play.

Scrum half Annakaren Pedraza put Lindenwood shorthanded with a yellow card in the 24th minute, but her team did well to keep Penn State from lengthy spells of possession. Full back Hannah Gauthreaux sped down the wing from behind her own 22 a minute later before Feury finally made the tackle in her defensive half. Hawkins put Lindenwood ahead, 7-6, when Penn State was penalized for forming a maul illegally in its own half.

Pedraza’s return to the field preceded another set of penalties as her side attempted to exit its defensive end, and Gabriella Cantorna made no mistake for the 8-6 score. As halftime neared Scout Cheeks took the ball up the middle on a break to turn around the defense. The Nittany Lions swarmed and created an overload wide for Francesca Schaeffer to bring the score line at the break to 15-6.

Though Canett’s chip-and-chase attempt did not quite come off five minutes into the second half, the Nittany Lions piled on the pressure as they neared the try line. Amanda Berta drew a penalty meters from the paint and Kyla Chipman dove over to extend the lead to 22-6.

After Cantorna added three points with a penalty kick, 25-6, Lindenwood Kendal McCracken broke midfield and created a two-on-one opportunity with Hawkins. The flanker waited just a bit too long and was tackled before she could send her center the offload, but the ball was cycled wide to Mireille Codjia for the 25-11 try. Hooker Anne Marie Reed had her own break into the attacking half 10 minutes later, and substitute Jennese Bacon took the ball from the ruck to the corner for Lindenwood’s second try, 25-18.

With eight minutes remaining, Isabel Manu took a tap for the Lions from behind their 10 and sent a defender to the ground to close in on the Penn State 10. Hawkins provided support and found Gauthreaux running a line for the match-levelling, 25-25, score.

Lindenwood had the momentum by erasing a 19-point deficit, but the ill-discipline came back to haunt the Lions. Cantorna was allowed to kick a penalty five minutes from time, and even a yellow card to Cheeks did not open enough space for Lindenwood to find a winner. Penn State took the Lions into touch beyond the 80th minute to bring about the final whistle.