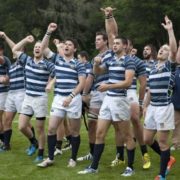 Following Spring Playoff wins over Long Beach State and Grand Canyon University in the Quarterfinals and Semifinals, respectively, the Aggies had the luxury of remaining close to home for the Spring Championship Final at Steuber Rugby Stadium, whereas the Seminoles had to travel across the country. Close proximity or not, the reigning National Champions proved the better outfit during its 60-5 victory.

Tries by Jacob Wright, Joshua Farnsworth and Guilherme Maia Silva built a 17-0 lead just 20 minutes into the match, before Florida State got on the board after being awarded a penalty try. A second score by Maia Silva, however, would send the Aggies into halftime with a commanding, 24-5, advantage.

Five minutes after the second half restart, UC Davis inside center Ari Wargon made his way into the try zone for his second score of the D1AA Playoffs. The Aggies would really begin to open things up around the 50th minute, and produce five more tries over the final 30 minutes of the match, including three from reserve back Jared Woosley.

The D1AA Final between Notre Dame College and UC Davis will kickoff at 11 a.m. ET and air live on The Rugby Channel. Tickets for the May 5-6 USA Rugby College 15s National Championships at Life University in Marietta, Ga. can be purchased here.