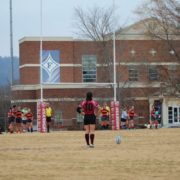 In the first match of the day it was Vassar coming up against Norwich, both teams looking to advance to the Championship game after missing out last year.

Mistakes and squandered  opportunities was the story for Coast Guard early on with missed kicks for touch and dropped balls made it difficult to sustain pressure. In defense Hayden Short for the Coast Guard was a force to be reckoned with, pilfering and serving out big hits; however, ill discipline and untimely mistakes were too much to overcome and set Coast Guard back early falling behind 12-0 courtesy of tries from Jennie To, and Abigail Alexander.

Coast Guard responded to the early flurry of points by proceeding to camp out in Vassar’s half for the next 10 minutes. Despite winning the territorial battle Vassar’s immense line speed and hard hitting kept Coast Guard from leaving with any points.

Vassar, through sustained pressure from set pieces and quick ball, show an impressive display of phase play and added to their score through a clever snipe from To bagging her second try of the day. Vassar were able to cross twice more before the half to extend their lead to 29-0.

Coast Guard drew first blood in the second half via a 50 meter line break from Linda Drake who had been looking threatening the whole game with ball in hand. The next 15 minutes of the game were spent in the middle of the field with teams swapping threatening opportunities, eventually it was Coast Guard who was able to take advantage of their opportunity and cross the line and bump their tally up to 10.

The final 10 minutes of the game saw Vassar and Coast Guard swap tries, with three minutes left in the game Vassar was sitting out in front 36-15, in an impressive display Coast Guard strung together impressive phase play and marched down the field to score a try long after the full time buzzer had sounded. Vassar winning 36-21.

Tony Brown was pleased with the performance, but conceded that the second half didn’t go to plan: ” We tried to play a more expansive game, but credit to Coast Guard they showed resilience, and won that 2nd half 22-7.” When asked  about the next game he responded simply: “It’s more about doing what you do well, rather than worrying about the other team.”

There was no lack in drama early on with Cincinnati’s flyhallf being ruled out minutes prior to the game. The drama continued on the field with Winona State receiving a yellow card 5 minutes into the game for repeated infringements inside their own 22.
Cincinnati unable to capitalize on the one woman advantage, then returned the favor, having one of their own sin-binned for the same offense. Winona took no time to exploit their advantage and scored off the ensuing tap kick. The score was converted to give the Blackcats a 7-0 advantage with 20 minutes played in the contest.

Cincinnati showed some impressive defense down a player with pressure building in their own 22. They responded with a poach, to alleviate the pressure, not too long after they broke free to score a try and tie the game back up, just in time for the sin binned player to return. With fifteen minutes left in the half scores were knotted up 7-7.

The stalemate didn’t last long as Winona State struck three times before the end of the half. The first try came on the back of impressive continuity in phase play. The second try was from a brilliant individual effort from Lindsay Rutz, stealing a lineout on halfway running 48 meters to unselfishly offload to her support. The final try of the half came as the Blackcats exploited an overlap out wide and good hands and were able to use their pace on the flanks, and help Winona State head into the sheds up 24-7.

Despite the less than ideal end to the first half Cincinnati came out guns blazing in the second half wasting no time in scoring a brilliant team try in the corner to narrow the margin to 12 points. Winona unperturbed came right back down the field and capitalized on a Cincinnati knock on to rebuild their lead.

In the final 25 minutes of the game Winona State showed their experience and pedigree, pushing their tally up to 46. Cincinnati wasn’t going to lay down, they showed reliance and character to respond and score another try, after camping out in Winona’s half for much of the final period of play.

Head Coach for Winona State, Josh Krewinski, expressed his team’s enthusiasm to have advanced to the Championship game: “We are excited to be back in the Championship Game, this was a goal of ours this season.” Whilst Winona is familiar with Vassar’s style he reiterated that they need to take it “One game at a time.”

Tomorrow’s D2 Women’s Championship Game will be played at 1:00PM EST and can be streamed on The Rugby Channel.

VMI started off their semi final with a strong showing, on the back of some Norwich penalties they were able to establish early field position.  Through a combination of strong forward play and blistering speed on the outside VMI opened the scoring in the 9th minute, via a try to their Fullback Paul Conteh .

The teams continued to trade field position but poor handling and strong defense caused opportunities to go begging. VMI added some insurance to its lead with a penalty from Thomas Mitchell in the 20th minute. Norwich wasted no time drafting a response getting themselves entrenched in the VMI’s 22m and were knocking on the door. However an excellent goal line stand by VMI caused the Norwich knock, VMI cleared and the pressure was released.

VMI’s ball security, tactical kicking game and speed in the back three continued to be the difference maker in the first half as VMI garnished their lead with a penalty and a try in the corner to create a 16-0 buffer. In the final minutes of the first stanza VMI was left a man down and Norwich were able to capitalise, to cut VMI’s lead down to 16-5 thanks to a try to Taualupe Tau.

VMI continued to exploit their man advantage early in the second half with constant pressure being placed on VMI’s line. After solid stands eventually Norwich was able to breach the line and draw within 4. Norwich’s explosive start to the second half continued with players breaking the line constantly, however, lack of support and great cover defense from VMI lead to their 4 point lead staying in tact.

The lead wouldn’t last forever. Through winning the territorial battle and strong ball retention Norwich mounted another attack and with 15 minutes left Norwich were able to grab their first of the game. That jubilation was short lived as VMI responded immediately scoring a try to regain the lead and push the score to 21-19. In a seesawing 10 minute period both teams pushed and tested each other. However, it was Norwich who were able to claw back and take the lead 26-21 with 6 minutes remaining.

VMI never gave up and with two minutes left they spread the ball wide and scored the equalizing try, with the opportunity to take the lead on the kick. The kick was no good. After 80 minutes of frantic and champagne rugby, the game headed to extra time.

Extra time started with a bang, as Norwich ran in two tries taking advantage of a tiring VMI squad, but with both conversions being unsuccessful the writing wasn’t on the wall just yet. VMI in the waiting moments of extra time’s first period responded with a converted try to draw within 3 point at the end of the first half of Extra time.

The second period of extra time began with pressure being added to Norwich’s lead by VMI, eventually cracking and after conceding a penalty VMI was able to bring the game back to a stalemate at 36-36. VMI continued to apply the pressure and camped out in the 22 of Norwich. Norwich held strong and continued to withstand the onslaught and kept VMI out. Meaning that the game advanced to to a ten min
ute sudden death period.

Sudden death was almost over as quickly as it began as VMI conceded a penalty dead in front of their point 40 meters out off the kick off. A quiet hush fell over the crowd, but the kick was wide left. A knock on from the ensuing drop out lead to a VMI scrum. From the scrum the ball was shifted wide and that was all she wrote, as Grant Fudge sprinted down the sideline shedding tacklers, the way dog sheds hair. VMI winning the semi-final 41-36.

VMI Coach, Thomas Trumps was emotional on the sideline: “Huge! …Just huge very emotional. Norwich, what a great team what a great battle…It’s great for the kids”

The second men’s semi final picked right up where the first left off. North Dakota couldn’t wait to break the deadlock scoring in the first 45 seconds. Whitewater responded moments later with a gallop down the sideline for 50 meters. The game then when back in forth between oppositions’ 22s but with nothing to show for it. The deadlock was broken 10 minutes later with a brilliant kick and gather from Whitewater. After the conversion was unsuccessful the scoreboard read 12-7, Whitewater. Their lead was cut into shortly afterwards when North Dakota slotted a penalty right in front to bring the game within two.

As championship caliber teams do, Whitewater was not about to let North Dakota get a sniff, responding two minutes later with a great team try and conversion to extend their lead to 9 points. North Dakota wasn’t fazed marching right back down the field to reclaim the seven points they had just given up to come back within two.

The second half was all one way traffic. From the kick off Whitewater established residency in North Dakota’s half. After peppering the North Dakota defense for the first ten minutes of the half Whitewater eventually where able to harvest the fruits of their labor and added another 7 points to their lead. Not long after their try to open the 2nd half they added a penalty goal, increasing their lead to 16.

North Dakota made the occasional journey into Whitewater territory, but due to superb defense they were forced to fight all the way for any points. As the old adage goes, “perseverance pays off” and in the 70th minute North Dakota was able to score and excellent try built off strong forward running, and hard work around the break down, cutting the lead to 11. But, as they had done all game, Whitewater answered immediately and took back the points they had given up, stretching the lead out to 16 once again. They continued to pile the points on in the waining moments of the game, kicking a penalty then running the ensuing kick off back in for a try to bump their lead to an insurmountable 51-25.

Matt Pederson, coach of UW Whitewater, put the second half dominance down to his bench: “They brought energy and pace to the game…they’re not that far of being a starting first fifteen player.” Pederson was also quick to acknowledge that if they are to go back to back they can’t focus on VMI too much: ” We need to come out with our game plan… and get our bodies healed up.”

VMI and Whitewater will face off tomorrow at 3:00pm.

All of tomorrow’s matches will be available to stream on The Rugby Channel.