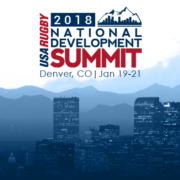 Nominations for the 2017 Coach and Referee of the Year awards are now being accepted through December 1, 2017. Submissions will be evaluated by a reviewing committee, while winners will be announced and awarded January 20th, 2018 at USA Rugby’s National Development Summit in Denver, Colorado. With more recognition in line for rugby community members than in year’s past, the 2017 Awards Banquet is sure to be well celebrated.

2017 will also be the inaugural year for Referee awards. USA Rugby Referees will be honored in two categories; Referee Coach and Community Referee. The Referee Coach of the Year awards will be presented to persons influential in the development of rugby officials in their local area. Community Referee of the Year will honor referees who have given the most to their local rugby community through their officiating.

In a year of firsts, each category’s awards will be divided into two groups, Men’s and Women’s. Every award will have one winner from each group recognized at the National Development Summit.

The Coach of the Year Awards are streamlined into three categories: Senior Club, College, and Youth & High School. The Senior Club Awards will recognize coaches that demonstrate excellence at one of the highest levels of rugby in the United State. The College Awards honors coaches who have produced competitive, successful sides while facilitating the development and refinement of their athletes. Youth & High School will be awarded to coaches who have proven dedication to expanding the game of rugby in their local community.