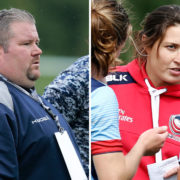 BALTIMORE – Five members of the American rugby community were recognized during Saturday’s 2016 Coach of the Year Awards at the 2017 USA Rugby National Development Summit Awards Dinner.

“Beyond the combined successes of the coaches’ teams, tonight’s recipients exemplify the community’s ever-present passion for growing the game humbly and professionally,” Forehand said. “Their efforts affect our players, fellow coaches, and represent the values of rugby that positively draw attention to our game.”

In just the second year of the varsity program in Marietta, Ga., Chou led her squad of young women to a Semifinal appearance in the inaugural D1 Elite competition, beating Lindenwood University in the Quarterfinals prior to the next-day loss to eventual National Champion Pennsylvania State University. While the men’s programs at Life – collegiate and club – have enjoyed success over the years, the young women’s team has excelled in 15s and sevens, with six student-athletes named to the Collegiate All-American lists and several others earning international honors with the Eagles and All-American teams following a 2016 USA Rugby College 7s Women’s Division I National Championship victory.

Chou also piloted USA Rugby’s Training & Education shadow program, following the Women’s Eagles coaching staff during the summer’s Women’s Rugby Super Series. Her contribution to the women’s game continued to affect the youth levels, as well, serving on the Board of Directors for Atlanta Youth Rugby and coaching at the Life U High School Rugby Camp. Chou also welcomed several coaches from collegiate and international programs to Marietta to shadow her and her coaching staff.

A former Eagle, the National Team Coach of the Year, Bydwell, took on behind the scenes roles with the Women’s Eagles Sevens in 2016, serving as team manager to Richie Walker’s teams during the HSBC World Rugby Sevens Series and Rio 2016 Olympic Summer Games. She also assisted Farrah Douglas’ Girls High School All-Americans powered by Atavus to a Europe Women’s U18 Sevens Championship in addition to her attack coach duties with the XVs team, with the GHSAAs outscoring opponents by 688 points for a 12-1 overall record.

As rugby operations director at Atavus, Bydwell’s skill set and knowledge of the game are not imparted exclusively to the national teams, coaching youth at USA Rugby Academy powered by Atavus camps as well as coach education programming.

The Competitive Coach of the Year, Fox, was recognized for his ability to raise the level of development and refinement of the players under his tutelage. Named Head Coach of the 15s team in South Euclid, Ohio, in late 2015, he brought the Falcons from Division II contenders to Division 1-AA runners-up at the 2016 USA Rugby College 15s National Championships. The program also reached the Cup Quarterfinals at College 7s before returning to the 15-a-side game in the fall, when the Falcons went undefeated – and beat five D1A teams, including Quarterfinalists Davenport University – on their way to a Fall Championship victory in December.

The results on the field stem from the culture Fox has created at Notre Dame College, from adventurous trips around the United States during tours to the camaraderie instilled through volunteer work.

The Participation Coach of the Year Award is awarded to a coach that does not receive monetary compensation for his or her coaching services. There is more to it than that, however, and Ross-Ma’u has demonstrated a dedication worthy of recognition. Coach of the men’s and women’s programs at MiraCosta College, the boys and girls teams of Murray High School and Alta Vista High School, the Mission Vista High School boys varsity and junior varsity teams, and the under-16, under-18, and senior Tri-City Rugby Club teams, he has somehow also found time to connect with young rugby players off of the field in the Oceanside, Calif., community.

Ross-Ma’u’s passion to positively pass on the game of rugby has helped a multitude of student-athletes graduate high school, and the founding of the Rugby Club at MiraCosta Community College in September has offered young athletes the opportunity to further their education while continuing to play rugby close to home. He regularly speaks in the community on rugby and additional topics, supports the efforts of local schools to mentor students, and runs a non-profit music academy in addition to time spent on the rugby field.

Mystic River won its first Division I National Championship in 42 years this past June, finishing its competitive season 10-3. Following a disappointing end to the previous season, Senior Club Coach of the Year Award winner Smith motivated his players to the title-winning season, eventually overcoming a half-time deficit in the Championship match to bring home the trophy. Highlighting the basics of tackling, the breakdown, and the pass-catch, Smith has propelled athletes in the northeast to international honors, as well.

Touted for his ability to “man manage” players from all walks of life and experience levels, Smith also assists USA Rugby National Development Academy Northeast Academy, where some of Mystic River’s players train full-time. He is not 15s-specific, either, able to coach the Olympic sport of Rugby Sevens at a high level. Smith’s Mystic River team at the 2016 USA Rugby Club 7s National Championship reached the tournament Quarterfinals before falling to the third-place team.