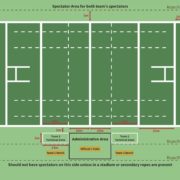 The introduction of Technical Zones (TZs) to high school rugby matches has been a priority for us this spring. This has come with mixed reactions from teams and coaches, but has been a great benefit to those programs who utilize these zones for their matches. Here is a quick overview of the what and the why on TZs.

What is a Technical Zone?

‘Technical Zones’ are a catch-all term for a way to set up and run a field for a rugby match in an organized fashion. Simplified, it is a box painted on the sideline of the field meant to contain coaches and substitute players, a designated place for spectators, and a way to run the match using a #4 referee or ‘stat kid’, to steal a wrestling term.

A few years back I brought several athletic directors to a high school rugby match to gain their impressions on our sport. There was a lot they loved about it and they could not get over the fact that everyone called the referee ‘sir’. After the match, I interviewed them about their experience and they unanimously said that rugby could be a sport they supported for their schools…BUT, we would have to implement some structure around the games. When probed for more detail, it was clear that rugby is the ONLY HS sport that does not use some sort of structure for their coaches, subs and fans around the field. Think about the rules around football coaches and subs, or baseball dugouts, or basketball benches. These structured areas are key to the organization of a game and helps control any potential issues that might arise.

For everything you need to know about Technical Zones, check out these informative documents.

So why wouldn’t a team use Technical Zones? Here are a few of the most heard reasons:

‘I need to coach my team!’ – we hear this every once in a while and it usually comes from the coach who wants to run into the try zone after every try or follow the team up and down the field for purposes of yelling instructions at players.

During a rugby match it is time for the kids to take over and enjoy themselves. A coach’s time is at practice and before or after a match. Yelling in orders from the sideline does not contribute to the fun for the players or a successful outcome. Additionally, if you have ever seen a lineout or scrum 5 meters from the try line with all the coaches and all the substitute players standing there and screaming at the top of their voices, you will understand why we need to limit this practice.

I recently attended a top HS match between two great east coast teams. It was an amazing display of rugby, but simply looked disorganized. Each team had coaches on the sidelines, in the try zones and on the opposite side of the field. The kids were getting orders called in from every angle, and several times the orders conflicted with one another. I can’t say this with complete certainty, but if those kids just played rugby with all coaches a mile away watching it on TV, the same outcome would have occurred and the kids would have still had a great time. We need more decision makers in American rugby and this is an easy way to start that process.

‘Football puts teams on the opposite side of the field!’ – We are not football, and do not want to be football. The practice of having two armies of fans, coaches and players facing each other across a 50 yard patch of grass and screaming at each other is not the ethos, nor spirit of our game. In rugby, our Technical Zone area is on the same side of the field so the players and coaches can work with the #4 referee or stat kids to substitute players, administrate sin bin or blood subs, and generally operate the match. Fans should be together on the opposite side of the field.

Again, there is nothing worse than a coach screaming at their players, or the referee and the fans standing behind joining in. When fans are across the field from the teams, they watch the game as spectators, not as participants.

If your fans cannot be on the same side of the field as fans from the other team, you should not invite those people to your matches. We have heard this before, and it is not an excuse to avoid TZs. If there are issues between fans, ask those people to stay home or educate them on the values of rugby. Our fans must understand our cultural values just like our players, coaches and referees.

Leave the medical assessment to the trained professionals.

Other Benefits of Technical Zones:

Stat Kids – We steal this term from wrestling, but a #4 referee is really just a ‘stat kid’. These positions can be a parent, a player or volunteer students from the school. A #4 referee (or stat kid) should be required at every match and is easy to implement. They keep the score, track substitutes and keep the time for sin bins or blood subs. All the #4 referee paperwork is on usarugby.org and is extremely simple to use. The paperwork tracks all the information needed to properly score and track a match and is also great for reporting box sores to the newspaper or online media!

There is a free course on worldrugby.org that anyone can take to learn this position officially, or they can simply read the USA Rugby documents provided with the TZ paperwork. It is a simple addition to make a game that much more structured. Find the courses here.

Sideline Behavior – Unfortunately we have to bring this up, as it does occur. We get reports weekly of coach, player and fan behavior issues. Although a TZ box does not inherently diminish the complaints a coach or sideline might have, it adds structure to a chaotic sideline and allows a referee and players to know where communication is coming from.

Referees – Refereeing the game of rugby is a lot to handle and the game is only getting more complicated every year. The players are getting faster, stronger and more knowledgeable, and referees have to up their game on the field. TZs drastically help referees to keep non-playing items organized and orderly. Until every match has Assistant Referees and #4 referees assigned, the referee in the middle is responsible for refereeing the match, keeping the score, tracking the time, tracking the time of sin bins, tracking the time of blood subs, tracking the number of substitutes and when they can come on and off the field, and lots of other items. Help us simplify their lives by organizing this off-field stuff into easy to understand TZs and add a #4 referee or stat kid to help out. If nothing else you avoid the screaming from the sidelines of ‘Sub Sir! Sub Sir!!!’.

American Sporting Culture – If we are to truly become a ‘legitimate sport’ and take our place in the hearts and minds of the American public, this happens at the high school sport level. If we get it right in high schools, rugby will flourish. If we let rugby degrade into the worst parts of ourselves, it will die. Acclimating to the best parts of other sports by using existing football or soccer stadiums on school grounds, using normal calendars of a high school season, and using Technical Zones and other items like it, we are right on track to legitimacy and acceptance in American schools.

Take pride in the fact that we share a slice of pizza and a war story with the other team after a hard fought match, or in the transformation of that timid child into the confident rugby player. Let’s get on board moving rugby forward in leaps and bounds, not by baby steps, and Technical Zones is today’s giant leap forward. Let’s all get on board.