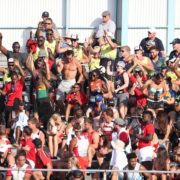 Representatives from USA Rugby High Performance made the trip to New York City this past weekend, catching a glimpse of what has been a well-stocked field of future Eagles for some time now. Based on Club 7s tournament play seen in person, a selection of invites were already handed out to standout athletes on the Women’s side, inviting them to camp in Chula Vista starting in September. It’s to be determined which men’s players will also be invited.

USA Rugby High Performance reps and attending media kept a close eye on this year’s standout athletes, compiling Dream Teams and MVPs on the Men’s and Women’s side. A broad representation, from Eagles to first-timers, filled out the Dream Teams while two spotlights fell on Stephanie Rovetti and Michael Nelson. Both winning 2018 championships with Sand Diego Surfers and Bulldog Rugby respectively, picked up the top tournament honor having followed different pathways.

Rovetti, participating in her first ever National Championship, is new to the game but with a long athletic history proved rugby talent can grow from anywhere. Nelson alternatively celebrates his fourth national title in 2018 and with MVP recognition, is solidifying himself as a tournament veteran.

When the final whistle blew on Sunday night, a total of 44 matches were decided by 7 points or less, as reported by Dustin Rosen of Rugby 7s Magazine. Program development from the bottom up is on the rise and seeding restructure by the Sevens working group of the Performance Game Board produced one of the more competitive tournaments to date.

Men’s representatives from the Frontier region won the event for the third straight year and had both qualifying teams in the semifinals for the same span. The third-seeded Frontier team, Kansas City Blues, also walked away with a Bowl title. In an impressive streak, the Men’s Frontier region has earned a medal every year since 2005.

The San Diego Surfers were the first women’s program to win three National Championships, doing so in only the eighth edition of the Club 7s Championship. The powerhouse team from SoCal have medaled in six out of eight championships, never finishing below sixth.

Co-hosts Old Blue of New York and New York Athletic Club didn’t finish with the result they were expecting. After going through qualifying undefeated, Old Blue dropped a hard-fought 7-5 loss to eventual runner-up Belmont Shore Rugby. Old Blue eventually finished 7th overall. NYAC similarly finished lower than expected, having lost a lineup of key players to injury in the preceding weeks. In the women’s bracket, New York Rugby lost to ARPTC Blue at the death in the Women’s semifinal, settling for the Plate and finishing a respectable 5th overall. It was an unbelievably well fought match and despite the ball not bouncing their way, sevens remains as exciting as ever. With the success of the event and New York proving to be a top venue, each club should see another opportunity to win on home turf in the future.

Five of the top nine teams from the women’s event currently have representation in the Women’s Premier League (WPL) – including eventual champion San Diego. A hand full of teams additionally featured WPL athletes with Life West set to challenge their way into the league this Fall. Without skipping a beat, the 2018 WPL season and 10th anniversary kick off this Saturday.

The average participant age was 25, and over 55% of athletes in attendance are still actively in college/university. Men’s champion Bulldog was the youngest team in the men’s field, featuring many USA Rugby Collegiate All-Americans, now making their way to Glendale for camp and RugbyTown 7s. In the women’s bracket, national runner-up Scion was the youngest team in the entire tournament.

Honorable Mention: On the rise

Weekend attendance was up 23% over 2017 with a significant number of fans braving the stormy weather on Saturday. Rain or shine, rugby wins.

A growing media presence landed in NYC this year with coverage increasing by more than half. Special recognition goes out to FloRugby for their whistle to whistle broadcast, along with Rugby 7s Magazine, Rugby Wrap Up and Next Level Rugby for their attendance and in-depth coverage. USA Rugby social media saw Facebook and Twitter engagements more than double over 2017 as the hunger for club rugby content and daily interaction continues to rise.