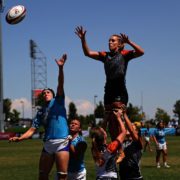 Eight Competitive Regions will organize and host series of sevens tournaments that will produce regional champions. In return, those teams will qualify for the Aug. 12-13 USA Rugby Emirates Airline Club 7s National Championships at the National Sports Center in Minneapolis, where all 96 matches of the Championship event will air live on The Rugby Channel. More information on the 2017 Club 7s National Championship and the event’s history can be found at USAClub7s.com.

Three qualifying events out of the South Region were contested prior to the conclusion of Club XVs, but the season for National Championship qualifiers does not truly heat up until the weekend of June 17, when over a half dozen tournaments from all over the country are on tap from Worcester, Mass., to Salem, Ore.

The Southern Competitive Region has gotten a head start on the competition in terms of qualification. In the Carolinas, the Charlotte Olde Originals and Columbia Bombshells won opening tournaments to take control of the men’s and women’s divisions, respectively. Last weekend, Georgia’s Local Area Union opened its series of sevens tournaments at Hotter’n’Hell 7s in Columbus, Ga.

Elsewhere in the South, Florida’s best clubs begin their qualifying seasons at Fiji 7s in Miramar, Fla., where one men’s team and one women’s team will take an early advantage towards staking claim to a spot at the July 22 Southern Championship in Atlanta. No men’s side has emerged from Florida to contend for a Club 7s title since a Perry Baker-led Daytona Beach Coconuts squad placed ninth at Nationals in 2012.

On the other hand, two clubs represented the state of Florida in Denver at last year’s Club 7s. Orlando Rugby’s run at Dick’s Sporting Goods Park was the club’s second consecutive trip to Club 7s, while Phoenix Rugby made its first-ever appearance at Nationals.

Still, do not expect the women’s competition to be a two-dog race. Fort Miami won the Florida Conference in 15s this season before taking the South Championship, and eventually ended its season in the Division II National Quarterfinals. Given its recent form in 15s, expect Fort Miami to push Orlando and Phoenix for sevens supremacy in the Sunshine State this summer.

The 2017 USA Rugby Emirates Airline Club 7s National Championship will be the first National Championship to be staged in Minnesota since Detroit Rugby beat Cincinnati-Dayton Rugby, 11-10, in Minneapolis for the Women’s Division II title in 15s. Adding to the excitement of National Championship rugby’s return to the Twin Cities is the Aug. 11-12 National High School 7s Invitational hosted by Minnesota Youth Rugby, which will provide an excellent opportunity to showcase the state’s vast number of impressive high school rugby programs and players.