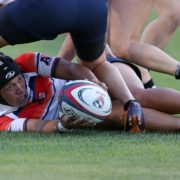 LAFAYETTE, Colo. – A busy weekend of Club Championship qualifying tournaments saw many of Nationals’ usual suspects raise hardware before the country takes a break from qualifying events during the first weekend of July. The sweat-drenched Saturdays over six Competitive Regions put regional standings positions in the balance, with nearly every team competing putting in the training and travel hours in hopes of earning one of 32 places at the Aug. 12-13 USA Rugby Club 7s National Championship in Minneapolis.

Mystic River made major inroads in its attempt to qualify for its third consecutive National Championship field by winning Newport 7s. The 2016 Division I National Champions in 15s had two sides competing in the event’s top bracket, but it was Mystic’s No. 1 squad that posted a 4-0 mark before providing a Cup-winning performance in the Final.

Mystic River coasted to pool wins over Long Island and Village Lions before putting 36 points on both White Plains and 15s National Runner-up New York Athletic Club. The Cup Final pitted last week’s winner of Monmouth 7s, Old Blue, against Mystic River. Eager to not allow Old Blue to widen its Atlantic North lead as the region hits its midway point, Mystic River scored a late try to down its rival and post a 17-12 win.

The women’s competition to qualify for Nationals out of the Atlantic North is divided into two sub-divisions: Empire and New England. Empire held its first tournament of the summer in Danbury, Conn., at the Tri-State 7s that witnessed New York Rugby Club take first place thanks to a win over Old Blue in the Final.

Reigning Club 7s National Champion Rugby Utah avenged a pool play loss to local side Denver Barbarians in the Cup Final to win the first of three qualifying events in the Frontier Region.

Despite Utah’s dominant run last summer, it was the Barbarians that appeared to be the strongest team heading into the knockout rounds thanks to a 22-point victory against Rugby Utah in pool play. Rugby Utah, however, got stronger as the afternoon in the Rockies wore on. In the Final, Denver held a lead over its Frontier rival before relinquishing its advantage on a late try and surrendering the Denver 7s title to Rugby Utah.

The team that lost to Rugby Utah in the 2016 Cup Final at Nationals, the Kansas City Blues, earned third-place points at Denver 7s despite losing to the Denver Barbarian’s ‘A’ side in the third-place match.

Two regional all-star squads outplayed the fields at Ruggerama for first-place standings points in the Mid-Atlantic. On the men’s side, newly-formed Beltway Elite hoisted first-place hardware, while 2016 National Champion Scion Sirens outclassed the rest of the women’s field.

Beltway Elite topped the likes of Schuylkill River Exiles, Norther Virginia Rugby and Rocky Gorge to win the Mid-Atlantic’s first qualifying tournament. The Sirens, who will be tasked with bleeding new players this summer with stars of the 2016 National Championship like Stacey Bridges, Abby Gustaitis, Sam Pankey, Sara Parsons, and Kimber Rozier all in the running to make the Eagles World Cup squad, fended off a Ruggerama field that included Northern Virginia Rugby, Philadelphia Rugby, and D.C. Furies.

Like the Scion Sirens, San Diego will test its depth throughout the summer with many of its players competing for coveted spots in the Eagles World Cup roster.

Belmont Shore made it two-for-two in Pacific South qualifiers by another first-place finish at Orange County 7s. A week after taking the top prize at OMBAC 7s, the three-time National Champions in sevens outlasted the Tempe Old Devils, Old Mission Beach Athletic, Orange County Ravens, Santa Monica Dolphins, and others to widen their lead in the Pacific South standings.

American Rugby Pro Training Center kicked off the women’s qualifying rounds for Nationals with a win in the Finals of Tornado Alley 7s, while the Dallas Reds posted its first Cup win of the summer after a third-place finished at Bloodfest 7s last week.

ARPTC, winners of the 2015 Club 7s National Championship, began the afternoon in Norman, Okla., with three shutouts while scoring 105 points of their own. The Austin Valkyries, however, comfortably stood toe to toe with the National Development Academy in the Final. The 2017 Red River Champions in 15s fought valiantly, but in the end it was ARPTC that won the tournament with a 17-12 win again the Valkyries.

The Reds’ lone loss on the day was to the Austin Blacks, but Dallas beat the Blacks when it mattered most. In the Final of Tornado Alley 7s, the Reds earned themselves a 21-12 win over Austin. The Blacks’ second-place finish keeps Austin in the lead of the Red River Region, but Dallas is just behind them in second and the 2017 Division I National Championship-winning Austin Huns currently sit in third-place.

Miami Rugby won the men’s bracket and Atlanta Harlequins won women’s bracket at the 26th Todd Miller 7s Tournament, all the while raising money for a good cause.

Miami put itself in good shape to represent Florida at July 22 Southern Championship. In the Region’s first runout after Fiji 7s was rained out, Miami picked apart the field in Orlando for a 5-0 record, including a pair of wins over Boca Raton, the latter of the two being a 21-point victory in the Cup Final.

The Atlanta Harlequins, making a guest appearance at the Florida Union event, initially slipped up to the Miami Amazons, 17-7, before finding their form while closing out the day with four consecutive wins. The concluding win was in the Cup Final where the Harlequins reversed their opening game loss to the Amazons, beating Miami 17-7.