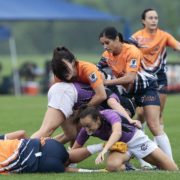 The University of Central Florida Men’s Rugby Club will host the 26th annual Todd Miller 7s Tournament on Saturday, June 24 at Emery Hamilton Sports Complex in Orlando, Florida. Just minutes from Disney World, the pitch will be packed all day with national qualifier play for both men and women’s club teams along with high school, men’s, and women’s open divisions.  With 30 teams in total registered, Todd Miller 7s is shaping up to be one of the largest summer tournaments in the Southern region.

As the summer sevens season heats up in Florida, teams are looking to punch their tickets to the 2017 USA Rugby Emirates Airline Club 7s National Championships this August in Blaine, Minnesota. As the first of two tournaments in the Florida Championship Series, Todd Miller 7s will feature intense competition from Florida’s best men’s and women’s squads. Following the final tournament in the Florida Championship Series, the Men’s Southern Conference will hold its National Qualification Tournament on July 22 in Atlanta to determine which teams will advance on to the National Championships. Florida region women’s teams can also qualify for the Qualification Tournament in Atlanta with their performances in Todd Miller 7s and Gulf Coast 7s on July 8.

Teams in action in men’s qualifier play include the Bay Area Barracudas, Boca Raton Buccaneers, Miami RFC, Orlando Rugby, and Naples Hammerheads. Miami RFC will look to defend their crown as 2016 Todd Miller champs after their 45-5 victory over Orlando in last year’s Cup Final.  After an impressive second place in the Florida DII conference in the fall, Boca Raton looks to start its own run at a national championship with an early statement at Todd Miller.

On the women’s qualifier side, Orlando Rugby and Phoenix Rugby come in as favorites after facing off in last year’s Todd Miller Cup Final, and then both going on to represent Florida in the 2016 USA Rugby Club 7s National Championship in Denver. The Miami Amazons and Atlanta Harlequins will look to dethrone Orlando and Phoenix and carve out their own path to Nationals.

The tournament was named in 1991 to commemorate UCF rugby player Todd Miller who severely injured his neck and spine and was partially paralyzed in a match in October of that year. For over 25 years, the tournament has honored Todd and made rugby into a force of good for the community through charitable donations. This year’s tournament will benefit the UCF Foundation, supporting the university in their efforts to uplift the Central Florida community.

“This tournament has an amazing history,” said UCF head coach Evan Haigh. “We are excited to have 30 teams playing this year where proceeds go to support the UCF Foundation.”

More information about the event, including the Saturday schedule and results, can be found on the tournament’s Facebook page.