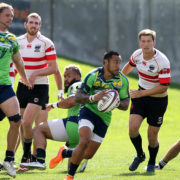 GLENDALE, Colo. – In just their second year in existence, the Life West Gladiators are USA Rugby National Champions. The club was able to pull away from perennial contenders Wisconsin Rugby to capture the 2015 USA Rugby Emirates Airline Men’s Club Division II National Championship by a score of 43-24.

Setting the tone early with the performance of the club’s pre-match haka, Life West came flying out of the gate to put in an early try by flanker Akuila Uaisele in the third minute. After a Wisconsin penalty kick, the Gladiators were quick to strike again through the hands of Mose Fualaau, which gave Life West a 14-3 lead after just 14 minutes.

Wisconsin, however, was not without fight as it began to settle in to its pattern. The men from Madison were appearing in their fourth overall national championship final, and were in their third championship match in just four years. A pair of its own tries through winger Andrew Norton and prop Chuahy Flavio put Wisconsin ahead 17-14 at the 26th minute.

Not to be deterred, it wasn’t long before Life West regained control of the match. Tongan National Team star Nili Latu led the Gladiators back into the match with his power and leadership, and Life West was able to put in two more tries before halftime via sensational winger Leti Latu, giving them a 26-17 cushion as they wandered into the locker room.

A physical second half saw a long scoreless streak before Devereaux Ferris broke scoring open once again in the 62nd minute, scoring a marvelous try. Leki Latu would soon thereafter add his third try of the match, putting the Gladiators in charge 38-17 with just 10 minutes remaining.

A late Wisconsin rally included another try by Andrew Nelson, but Life West was quick to retaliate with Leki Latu’s fourth try of the match, putting the final score at 43-24.

The Smith & Forge Most Valuable Player of the match was Nili Latu, who was an unstoppable force from the #8 position.

The scoring was started by the Amazons as they scored via penalty kick in the 3rd minute. Both sides would go back and forth in the games first ten minutes as neither could seem to break through the other’s defense.

At one point however, the light switch was flipped for the Wisconsin Women as they began to pull away thanks to strong play from Wypych. Showing great speed, Wypych broke to the outside to grab her first try, and then quickly scored her second only eight minutes later.

Denita Arens would help bring the Amazons back when she would also score twice within minutes of each other. By the end of the half, the Wisconsin women held a 19-13 lead in what looked to be a closely contested match.

The second half opened with strong defense from both sides. Wisconsin would begin to pull away nearly 15 minutes into the half as Kris Peterson scored her first try and upped the lead to 26-18 following the conversion.

Both Peterson and Wypych would both follow up the scoring by notching their second and fourth try, respectively, and effectively put the game away for Wisconsin. Sacramento would go on to score twice in the final ten minutes, but ultimately could not pull off the comeback when the final horn sounded.

It was an enthralling ‘Battle of the Barbarians’ in the Men’s Division III Championship that went the way of Wichita after a Tri-City infraction in the dying seconds allowed the Kansas Club to secure the victory with a penalty kick. Wichita would go on to win their match 30-28.

In what might have been the match of the weekend, the two clubs traded blows for the entire 80 minutes. Tri-City opened the scoring with a Devon Benedict try in the 10th minute. Following a Tri-City yellow card that put them down a man, Wichita would open their scoring with a Stephen Wright try in the 26th minute, bringing the score to 7-7.

Neither team would be able to separate themselves from the other from that point on, ending the first half 14-14.

Tri-City had not trailed at any point in the game’s first 45 minutes, that is until a Seth Akpovona try gave Wichita a 19-14 lead. Wichita would then capitalize on a Dustin Fross penalty kick to up their lead to 22-14.

Following the theme of the day however, Tri-City would quickly rebound and cut the Wichita lead to one, 22-21, with just over 20 minutes to play. Wichita’s Derek Hargrave added a try of his own to increase his club’s lead to six but a costly yellow card following a dump tackle would set up Tri-City to take the lead following a converted try by Samisoni Hafoka, 28-27.

When the penalty had ended for Wichita, only a few minutes remained on the scoreboard. The Wichita Barbarians would go on to recover possession and score what would have been a winning try. Following video review, the play was called back and it appeared as if Tri-City would hold on. However, one more costly penalty would give Wichita the chance they needed.

Dustin Fross would again be called on for a kick on the left-hand side. Fross’ kick was strong and sure, as he was set up not far from the posts. As the kick sailed through the uprights, the Wichita bench exploded with excitement as their team capped a crazy back and forth match with a 30-28 win.