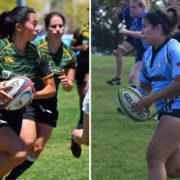 GLENDALE, Colo. – Milwaukee Scylla and San Francisco Golden Gate have patiently waited for their turn to play for a National Championship. Now that both clubs are in the midst of their best seasons to date, the two teams will have their shot Sunday, June 4, as part of the USA Rugby Emirates Airline Club National Championships at Infinity Park in Glendale.

The Women’s Division II National Championship Final will kick off at 1 p.m. MT and be broadcast live on The Rugby Channel.

Milwaukee will be making its first National Championship appearance this weekend, but Scylla have had the look of a championship contender in the past. Not many Midwest teams have been able to stand toe to toe with Milwaukee in recent years, but Wisconsin Rugby has had its number. Scylla was a combined 1-4 against Wisconsin over the past two years prior to the 2016 D2 finalist moving up to D1 this year.

The subtraction of Wisconsin from the D2 competition is not the only reason Milwaukee is playing for a National Championship Sunday. A group of veterans on the club have never been satisfied in their abilities and continue to push themselves to improve each and every season. This year the team has enhanced its overall fitness levels, and, despite appearing to have the strength to bully teams around the park, Scylla has worked tremendously hard to diversify its patterns of play.

“We knew we had to increase the tools in our toolbox, and the team had a commitment to this last fall and the work paid off,” said Milwaukee Head Coach Linda Niemela. “The team has enjoyed being more dynamic this year, and we have improved in making the mid-game adjustments to our opponents. We try to maintain a balance of bac-line and forward attack, so our style is a bit non-traditional.”

A fitter and more expansive Scylla went undefeated in conference play during the 2016-17 season, with just one game being decided by single digits. Somehow Milwaukee brought its play to new heights during the National Playoffs, more than doubling up its Quarterfinal and Semifinal foes. During those dominant wins, the forward pack collectively owned the set piece as it had all season, and its standout players in the backs, like Samantha Eurich, Chelsea Willies, and Abigail Williams, continued to gobble-up meters with ball in hand. Williams has been especially elusive this season, pouring in 19 tries over the team’s first eight games alone.

Golden Gate does not enter the Finals undefeated like its National Championship opponent, although the three defeats San Francisco was dealt may just be the reason its season is not over yet. Playing out of the Norther California Conference, Golden Gate took one on the chin against Division I Finalist Life West twice during the regular season, before dropping a third game to the Gladiatrix in the regional playoffs.

“Both games have made us better. They showed us where our weaknesses were and enabled us to work on them,” said SFGG Head Coach Andrew McKee. “We’ve never shied away from playing better teams, and it’s paid off with this playoff run. We wish Life West the best of luck in their D1 Final.“

The third defeat placed San Francisco in the D2 playoff pathway, and its proceeding win against the Emerald City Mudhens earned Golden Gate the National Playoff berth it has been working so hard to achieve.

Like Milwaukee, San Francisco found a new gear in the Quarterfinals and Semifinals. First, multi-try performances by Delaney Chapman, Valerie Ernst, Lindsay Kinsler, and Kristin Shum powered Golden Gate past Houston Athletic in the Quarterfinals, 62-14. On Day 2 of the West Playoffs, it was another dominant effort that awarded San Francisco with a 30-10 victory over the Old Pueblo Lightning.

Far from the biggest squad to take the pitch, San Francisco has relied on its team speed, relentless work rate, and eagerness to lay it on the line for their teammates as its own unique recipe for success.

“We just don’t give up,” McKee simply put. “We play at a high tempo, pressurize offenses, and have really good ball handling skills. If asked to, our players will run all day. We have a very tight group of players, and it shows in our level of commitment.”

The feverish pace in which Golden Gate plays has worked wonders up to this point, but it remains to be seen if it can produce one more win against a side like Scylla that does not have a true weakness in its game.

“We’re expecting a big, strong team who will look to dominate us up front and in the centers,” McKee accessed of Milwaukee. “If we’re going to win, we can’t let them dictate the speed and width of the game.”

Scylla does not know much about San Francisco, by is anticipating a difficult confrontation, nonetheless.

“We have never played San Francisco Golden Gate, but we expect them to be a strong opponent,” Niemela said. “We are excited to have this opportunity and test ourselves beyond the Midwest and NRC East opponents. We have found each of this year’s games to be unique, and the team has really enjoyed the challenge. The team is excited for Sunday.”