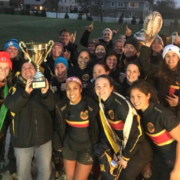 The Chicago Blaze Rugby Club played host to the Midwest Rugby Union Championships this weekend, where teams were playing for their shot at the national title, for their respective divisions. Women’s Division I and Division II as well as the Men’s Division II, Division III and Division IV levels of competition were all represented, providing high quality and entertaining matchups all through the day.

In the Women’s Division I competition it was Detroit Rugby Football Club facing off against Wisconsin Women’s Rugby. It was a one-sided affair with Detroit running away with the game 46-17. This marks Detroit’s return to the National Championship Series (NCS) as they were knocked out last year by Chicago North Shore, who have since made the migration up to the Women’s Premier League, where they finished 8th in their first year in the league. No doubt Detroit will now be focusing in on ensuring that they are able to make it deeper into the tournament this year.

In the Men’s Division II competition, it was another a Detroit Wisconsin derby, this time the teams were the Detroit Tradesmen, and the  Wisconsin Club. Whilst, the teams changed the outcome did not. The Tradesmen were able to put together an impressive 80-minute performance culminating in a 42-10 score line. Similarly to the Women’s Division I, this marks the Tradesmen’s return to the NCS. Last year they were able to make it all the way to the semi-final before falling 5 points shy of qualifying for the championship game. They will no doubt be using that result as motivation for this year’s endeavor.

For the Women’s Division II final, it was the Cincinnati Kelts that triumphed over Palmer College, 44-5. Cincinnati and Palmer were locked in a tight tussle at first, with Cincinnati only leading by five points twenty minutes into the game. However, the Kelts then went on to score 34 unanswered points to secure an emphatic victory. As they now advance into the NCS they will be feeling quietly confident knowing that the winner of last year’s National Championship, Milwaukee Scylla, came out of the Midwest as well.

Fort Wayne and Iowa City, in the Men’s Division III Championship, gave the crowd the most enthralling encounter of the day, with Fort Wayne coming out on top 25-22. The game was shaping up to be like the others, as Iowa City opened up a 22-10 lead five minutes into the second half; however, the tides turned. Fort Wayne came back to score fifteen unanswered points with the final try coming in the 76th minute, to complete the unlikely come from behind victory. Fort Wayne will now take the Midwest spot in the NCS.

Finally in the Men’s Division IV competition it was the St Cloud Bottom Feeders that took home the silverware, beating Scioto Valley 56-5. The game was one way traffic from the get go with St Cloud opening up a 27-0 lead at the half and the second half, whilst closer than the first, had a similar feel to the first.