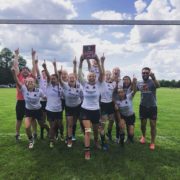 Chicago, IL- The Chicago Lions, have announced that for the first time in their fifty-four year history, they will be fielding a women’s fifteens side. The side will compete in the second division of the Midwest Women’s competition during the 2018 fall season. The Lions have had a successful women’s sevens program since 2012, making it into five of the last six national championships, but this will be their foray into fifteens.

“We are very excited to begin our women’s fifteen program and build off of the success Jeremy Nash and the sevens team have had in developing players to reach their full potential.” Noted Chicago Lions director of rugby, Dave Clancy. “We welcome players of all abilities and experience to join us in what is a very exciting venture for this team at an exciting time for the club on and off the field. Incoming players can expect a high level coaching staff, great facilities, superb resources and professional structures.”

Adding a women’s fifteens program, is just another step in the holistic approach to rugby that the Lions are investing in. The Lions now having a sevens and fifteens side for both men and women as well as a recently created youth program, with a new facility opening in the near future. They continue to be on the forefront of rugby in the Midwest. Players interested joining the newly formed team can email Dave Clancy at coach@chicagolions.com.