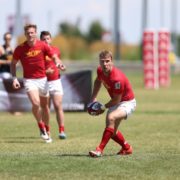 LAFAYETTE, Colo. – Twelve of the 16 spots in the men’s bracket of the Aug. 12-13 USA Rugby Emirates Airline Club 7s National Championship have already been awarded. Saturday, July 29’s Midwest and Pacific North 7s Championships will determine which four teams stake claim to the final four places at next month’s championship event at the National Sports Center in Minneapolis.

A series of three regional qualifiers have determined the top six teams from the Midwest competition that will play in this weekend’s championship event. The Chicago Lions head into the qualifier the favorite to nab one of two Midwest seeds to Nationals. After opening the summer series with a second-place finish, the Lions have reeled off tournament wins at Rock ‘n’ Roll 7s and Legacy 7s.

The only team outside of the Lions to have won a Midwest event this summer is Metropolis. The men from Minneapolis opened the summer in winning fashion by taking the top prize at Madtown 7s, and have not finished worse than third during the Midwest series. Metropolis has not qualified for the Club 7s National Championship since 2003, but with this year’s event being hosted in its backyard, the team will be desperate to reach the Midwest Final in Cincinnati.

Columbus Rugby stands fourth in the Midwest standings entering the championship event despite not participating in the first of three qualifying tournaments. A second-place finish at Rock ‘n’ Roll 7s was the team’s best performance, and it would be far from surprising if the team earns a bid to Nationals for the first time in club history after posting a 12-3 record in 15s during the 2016-17 season – more than double its win total from the previous campaign.

The other three Midwest sides in contention this weekend are the Chicago Blaze, Cincinnati Wolfhounds, and Legacy Academy, and each have their club’s women’s teams playing in Saturday’s Women’s Midwest 7s Championship. None of the three have qualified for a Club 7s National Championship previously, but do not sleep on the Wolfhounds. They have a third-place finish to their name this summer, and get to stay home for July 29’s deciding event.

Three Northern California squads and two from the Pacific Northwest make up the five-team round robin to decide which two teams advance to Saturday’s Pacific North 7s Final and earn the region’s two bids to Nationals.

The Washington Athletic Club has been the class of the Pacific Northwest. That may come as a bit of a surprise given its minimal rugby history, but the program has received a boost – to say the least – by a plethora of players from the Seattle Saracens outfit that won three consecutive Club 7s National Championships from 2013-15. The Sarries are not fielding a sevens team this summer, paving the way for players with USA Eagle credentials like Mike Palefau, Aladdin Schirmer, Shalom Suniula, and Peter Tiberio to link up with Washington Athletic Club. A name rugby fans have quickly come to recognize, Psalm Wooching, is also running with Washington Athletic. The former University of Washington football standout made headlines when he turned down the NFL Draft to pursue rugby.

Westside Ronin is the other club representing the Pacific Northwest. The team will be considered underdogs going into the weekend, but its experience playing against Washington Athletic has the team well prepared against a star-studded Pacific North Championship field.

The Life West Gladiators have been the best sevens team in the Bay Area this summer, but will have to continue their good form in order to get back to Nationals after missing out on the competition last summer. First-place finishes at both Carlsberg 7s and SFGG 7s have been platforms to show off Life West’s deep and plentiful roster. Still, there are a couple of key figures worth keeping an eye on: former UCLA All-American Zach Bonte and high-paced scrum half Devereaux Ferris are versatile weapons.

Sitting just behind the Gladiators in the Pacific North competition is Olympic Club, which represented the region at Nationals last year for the first time since 2012. The club from San Francisco benefits from a collection of graduates from the University of California, Berkeley, but none more important than former Eagle 15s and Sevens danger man and 2016 Club 7s Dream Team selectee Colin Hawley.

The third Northern California side heading to Tacoma, Wash., to compete for a place at Nationals is the East Palo Alto Razorbacks. The South Bay Area club has qualified for a Club 7s National Championship as recently as 2014 when the Razorbacks advanced to the Cup Quarterfinals. Expect East Palo Alto’s unquestioned leader, Siupeli Sakalia, to pace the Razorbacks.