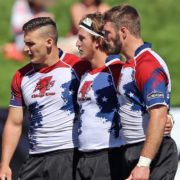 BRIGHTON, Mich. – The third and final Midwest qualifier will take place Saturday, July 15, at the Legacy Center in Brighton, Mich., where the participants and seeds for the July 29 regional championship event will be determined. The Midwest 7s Championship in Cincinnati, Ohio, will see the eight best men’s and women’s squads battle for qualification to the Aug. 12-13 USA Rugby Emirates Airline Club 7s National Championship.

A year after missing out on a trip to Nationals for the first time since 2012, the women of the Chicago Lions appear to be on the verge of earning the program’s fourth overall appearance at the Club 7s Championship event. The Lions took first place at both Madtown 7s and Rock n’ Roll 7s. Thanks to the victorious start to their summer, the Lions will claim the top seed at the Midwest 7s Championship by reaching the Finals at Legacy 7s.

“Defense has been a big factor,” coach Jeremy Nash said of the two tournament wins to open the summer. “Also our depth. We have a pool of 16 to 18 players competing for spots in the team.”

Depth will continue to benefit the Lions, but a few key players have made significant impacts. Brittany O’Dell is coming off of a season in which she scored 11 tries for the Grand Rapids Gazelles in 15s, and has maintained her impressive form into the sevens season. Defensively, Tanya Carlson and Charli Jacoby have been standouts, and their Chicago North Shore teammate, Devon Gold, has been solid in attack.

The team’s best finisher comes in the form of Danielle Ordway. The recent Davenport University graduate and All-American has a knack for finding the try zone and was named the MVP of Madtown 7s.

The Chicago Griffins, which made their first-ever appearance at Nationals last summer, look like the best candidates to take the Midwest’s No. 2 seed behind the Lions for a second consecutive trip to Club Championships. They have battled to third- and second-place finishes so far in the Midwest, and would need to endure an upset at Legacy 7s in order to lose the region’s second seed ahead of the Midwest Championship.

“The Griffins have quality players with experience and they know us really well,” Nash said of his opposition. “Every time we face them they challenge us to be our best.”

The Youngbloodz, a women’s Midwest select side, did not come together this summer, and thus will not be making a sixth-consecutive appearance at Nationals. Still, there are a number of formidable sides outside of the Griffins and Lions that are not only capable of making noise in the Midwest, but potentially at the Club 7s Championship.

“You have to also mention 1823, Cincinnati [Wolfhounds], and Minneapolis. All three teams challenge us every time we face them,” noted Nash.

The Chicago Lions also sit atop the standings in the men’s Midwest competition. Following an excellent 15s season that did not conclude until a defeat to New York Athletic Club in the Division I Semifinals, Chicago got a late start to its preparation for sevens. The brief but necessary down time after the 15s season resulted in a second-place finish behind Metropolis at the Midwest’s initial qualifier, before the Lions found their footing at last week’s Rock n’ Roll 7s and won the top prize in Cleveland.

“We didn’t have much time together before the first qualifier,” explained coach David Clancy. “That said, we still should have had enough on the day, but Metropolis played well in the Final and played to their strengths with a physical performance.

“Moving into the second qualifier, we were fortunate enough to have USA Men’s Assistant Coach Chris Brown come for a session and make some suggestions on how we can tweak our defense, which the side has taken on board.”

Lindenwood University standout Nick Feakes, whose two-day performance at Dick’s Sporting Goods Park last summer earned him a spot on the Club 7s Dream Team, returns to the Lions’ sevens outfit and continues to be one of their top playmakers. Two players with international experience that were not part of the Lions’ run to a fourth-place finish last year – the team’s best since 2013 – are nine-time capped 15s Eagles JP Eloff and former Men’s Eagles Sevens player Michael Ziegler. They give an already dangerous side additional firepower.

It is guaranteed Chicago will play in the Midwest Championship, but they will still need to perform to its standard at the event to qualify for its 15th Club 7s National Championship. Yearly Midwest 15s contender Metropolis has not advanced to Club 7s Nationals since 2003, but the team’s results so far this summer indicate the Minneapolis club has put additional emphasis on its sevens program this summer.

“They are hugely physical going forward and in defense, and very competitive aerially,” Clancy said of Metropolis.

Columbus Rugby sits in the middle of the Midwest standings after not competing in the region’s first qualifier. However, the team produced a second-place finish last week and is coming off of a 15s season that concluded with a 15-3 record. Columbus will be a major threat to take one of two spots to Nationals that will be up for grabs at the Midwest Championship.

“Columbus is a squad of very experienced and skillful players who have played at PRO or international level,” complimented Clancy. “They play a smart brand of rugby and have a nice balance in their squad. If you are not careful, they can punish you.”