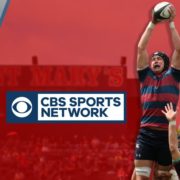 LAFAYETTE, Colo. – USA Rugby has announced that CBS Sports Network will televise the D1A Rugby National Championship on Saturday, May 6 from Saint Mary’s Stadium in Moraga, Calif. The match will start at 7 PM, ET.

“We couldn’t be happier to have CBS Sports Network as a television partner for our 2017 National Championship event,” said D1A Rugby Commissioner Kevin Battle. “CBS provides a national platform and professionalism that our student-athletes and elite collegiate programs deserve.”

The exposure CBS Sports Network provides D1A Rugby is just the beginning of a committed strategy to brighten the spotlight on USA Rugby’s largest membership base – college rugby.

“This is part of a broader plan to build on the initiative we’ve set forth surrounding elite college rugby,” said USA Rugby CEO Dan Payne. “This is very exciting news for not just this year, but also our multi-year plan to increase the scope and reach of the sport.”

Information related to ticketing for the Championship event in addition to competition updates throughout the remainder of the 2016-17 D1A Rugby season and postseason can be found on D1ARugby.com.