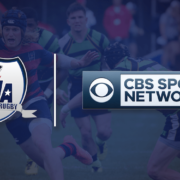 NEW YORK, NY. – CBS Sports Network and USA Rugby today announced a renewal of their television partnership, delivering increased coverage of the 2018 and 2019 Men’s D1A National Championship tournament. Starting this spring, CBS Sports Network will air both semifinal matches and the championship match, on April 28th and May 5th, respectively.

“The CBS Sports deal is a major step forward for collegiate rugby in the US,” said D1A Commissioner Kevin Battle, “On the heels of a successful finals broadcast in 2017, we are delighted to showcase the National Championship semis and title match.”

The new partnership, negotiated by USA Rugby’s commercial arm Rugby International Marketing and CBS Sports Network, builds upon 2017 coverage on the network, where only the championship game between Life University and winner Saint Mary’s College was televised.

USA Rugby CEO Dan Payne added, “This is the progression USA Rugby is excited to see, with a bigger spotlight on the game on a national stage.”

The aforementioned D1A National Championship matches, along with the preceding quarterfinals and Round of 16 games, will also be streamed live on The Rugby Channel, USA Rugby’s subscription video platform.

The semifinal and championship matches should once again be hotly contested. Defending champion Saint Mary’s College will soon begin their 2018 campaign for a tournament spot, while runner up Life University – the Gaels’ championship opponent throughout an unprecedented 5-year stretch – begin Mid-South Conference play on February 3rd. The teams currently sit as #1 and #2 in the D1A rankings, making them favorites to meet again in the final, but they will face tough competition from the more than 70 other programs that participate in D1A rugby.

CBS Sports Network, the 24-hour home of CBS Sports, is widely available through all major cable, satellite and telco distributors as well as via OTT streaming service providers YouTube TV, fuboTV, PlayStation Vue, DirecTV and Hulu. Additionally, a live CBS Sports Network stream is available through CBSSports.com and the CBS Sports App by authenticating with select providers. For more information, including a full programming schedule, go to www.cbssportsnetwork.com.

Battle concluded, “We want to thank our partners at CBS Sports, Rugby International Marketing, and of course the more than 70 coaches and over 3500 student-athletes that make up D1A Rugby.”

More information on Men’s D1A Rugby and resources to follow during the season can be found on d1arugby.com and the D1A Facebook page.