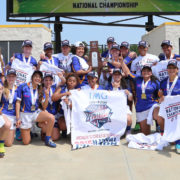 The Falcons’ backs ran what seemed to be random lines to offset the Highlanders’ defenders, and Danielle Walko-Siua’s dart on the wing in the seventh minute set up the match’s first try. Following a few phases inside Riverside’s 10, full back Emilia Ferrara dotted down underneath the posts for a 7-0 lead.

Notre Dame continued to knock on the door after the opening score and Najya Jordan kicked it down with a barreling run over the try line in the 12th minute.

Domonique Bellinger tried to get the Highlanders back into the game with a long run down the touch line after the kickoff, but she could not find support with a pass backwards. Notre Dame returned the favor by getting into Riverside’s half a few minutes later with a pass to Tiyana Taumanu not finding hands.

The Highlanders had another opportunity in a lineout in the Falcons’ half in the 20th minute. Desiree Millan took the ball from her forwards and waved off two attackers to wait for Bellinger, but the offload bounced off of the center for a scrum.

Notre Dame drew a penalty ahead of the mid-half water break, and immediately restarted the match with a bang. Gauthreaux saw a gap between two defenders at her own 10 and sprinted away from the defenders for an 80-metre try and 19-0 lead.

The Highlanders switched off at the end of the half and conceded three tries in the final 10 minutes. A penalty on the try line against Riverside gave Notre Dame a quick tap, and Shania Young received a sharp pass to score. Gauthreaux scored another 80-meter try before Lea Walsh ended the half with a try of her own.

Even with the 36-0 lead, Notre Dame did not let up on Riverside. Walko-Siua took a pass in stride 10 meters from the try line and beat two defenders in-goal to extend the lead to 41-0.

The Highlanders struck back through Michelle Hong, who put her side into the Women’s Division II Final with a last-second penalty in the Spring Championship Final a week ago. Riverside drew a penalty at Notre Dame’s 22 and Hong ran a perfect line to round the corner.

At midfield in the 46th minute, Bellinger broke away from the Highlander defense to reach the try line, where she was stopped with a trailing tackle. Walsh scored her second of the match under the posts after the turnover, but Riverside responded again after a quick tap along the try line.

Riverside would not get closer than 48-10, as Notre Dame capped its National Championship with four tries, including Walsh’s third, in the final 15 minutes to pad the score at 69-10.

Gauthreaux was named Most Valuable Player for her display, which gives Notre Dame College its first Division II National Championship.