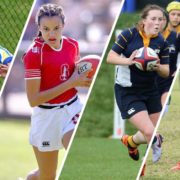 A D1 Elite contender last season, the Cardinal were knocked from the top-level competition at home last month as a determined Lindenwood University side – unbeaten in all but two games this year – crossed the Steuber Rugby Stadium try line 17 times in a 103-point Quarterfinal shutout. Featuring capped Eagles and experienced collegiate players, the Lions more than put the game away with a 10-try first-half haul.

For a team that has had difficulties creating squad depth in a popular rugby market in Northern California, Stanford could not make it two from two at the home regional playoff weekend following a Round of 16 defeat of University of Arizona the day prior.

“We started well against Lindenwood but we were overmatched athletically,” Cardinal Head Coach Josh Sutcliffe said. “They are a very strong team and were able to use athleticism to create space and break tackles. This hurt our confidence and they gathered pace, showing they are a quality team with the ability to put the foot down.v

“It was a great opportunity to get players game time against a good opponent. Additionally, this was an opportunity to work on combinations under pressure.”

Despite the issues in squad depth, Stanford played in the Pacific Mountain Rugby Conference title game in early March. It took a six-game winning streak in which the Cardinal outscored University of California, California State University, Chico, and Humboldt State University 234-78 to counter the two conference losses to fellow Spring Championship semifinalist Davis, but the Aggies added a third tally to the matchup’s win column to claim the conference’s No. 1 seed.

The big-game experience itself has benefitted Stanford in preparing for the Championship weekend in Georgia if not giving the team lessons in professionalism, but the toughest adversity the team has had to deal with comes down to numbers. Traveling with just three available substitutes during the season and ready to miss nine players at Life University to academic responsibilities and injury, Sutcliffe’s squad of 22 will need to adapt not only to an unfamiliar opponent, but also each other.

“We are traveling with a smaller squad, which puts pressure on our players to play multiple positions and adapt to their teammates around them,” the head coach said. “This has been a theme for us and we’ve rostered only 18 on some weekends, so we’ve learned to overcome adversity and developed resilience as a group.

“If we connect as a team and play together, we get better results through our teamwork. At each break in play, our goal is to call out our next focus and make sure it is team-oriented and helps us achieve our collective goals.”

What will not help Stanford in preparing for the Semifinal matchup is the little game film available on Notre Dame College. Prior to leaving Euclid, Ohio, for the regional playoffs in State College, Pa., the Falcons had only played seven-a-side rugby during the 2016-17 season. Head Coach Luke Markovich also took over full-time duties mid-season shortly after leading a sevens squad to the Las Vegas Invitational’s Women’s College 7s bracket Final as an interim head coach, clouding the Cardinal’s outlook on its opponent.

Reading the space in sevens and being able to maneuver the ball and bodies around the field came in handy against Virginia Tech in the Round of 16 as the Falcons dispatched the Mason-Dixon Conference’s No. 2 seed at Pennsylvania State University on the back of a scrum-half hat trick by All-American Danielle Walko-Siua.

The sophomore playmaker is a vital cog in the machine for Markovich’s side, a fact that became apparent in the Quarterfinal match against the Nittany Lions, a perennial champion that churns out national team players year after year. Walko-Siua required a blood substitution midway through the first half against Penn State after Notre Dame College conceded three tries, which led to the team’s first points of the game via an Emilia Ferrara penalty kick, before returning to the fray after a fourth try allowed. Perhaps still not playing at 100-percent as the Nittany Lions ticked the scoreboard to 57-8 with 10 minutes remaining, she was taken off of the field. Penn State would see out the 62-8 win.

Davis will have no shortage of motivation at Life University this weekend, least of all to protect the DI Spring Championship trophy sitting in its cabinet back home. The Aggies are unable to compete for a National Championship for a second year running following the absence of DI Fall Champion University of Connecticut at last year’s Championship event in Moraga, Calif., and a defeat in the D1 Elite play-in playoff match against Brigham Young University.

Center Erica Hipp’s heart-pounding, game-winning try in last spring’s title game spurred the team to continue its progression as a perennial DI contender. Beating a previous D1 Elite team, Stanford, three times in a conferencing-winning season was just the beginning as Davis proceeded to a 96-0 shellacking of Arizona State University in the Round of 16. Of the 16 tries scored in that game, only the first and last were dotted down by forwards, with Hipp and midfield partner Sydnee Watanabe, wings Prai Harris and Rebecca Lehman, fly half Caitlin Reid, and full back Carli Watt accounting for multiple scores.

BYU tested Davis’ mettle physically and mentally in the Quarterfinal, with the 2016 D1 Elite runner-up holding a size advantage throughout the XV. Quick points to open a 15-0 lead through 20 minutes ultimately caused the damage in the 44-19 result, but Davis’ own resilience to give BYU its greatest challenge of the season was commendable in that it was the only Quarterfinal between the four regional sites with a margin of victory smaller than 54 points.

Central Florida was not excluded from the list of underdog Quarterfinalists out in Marietta, where the Knights knew exactly what they were up against after a come-from-behind victory against 2016 Spring runner-up University of Virginia in the Round of 16. Beating opponents by an average of 69 points in the regular season may have spread a small sense of complacency through the squad, however, as the Knights were slower to react to the playoff challenges than their head coach would have liked.

The Knights only surrendered a lead once against Virginia, though it took more than 50 minutes to get clear by more than one converted try. Eventually reaching the Quarterfinal with a 48-20 win, Central Florida could not cope with the high-flying Running Eagles of Life.

“I think the biggest problem is they play teams that aren’t to their level a lot of times, and then they have a habit of just slacking because they can turn it on,” Head Coach Raoul Besse said. “At this level they have to be ‘on’ the whole time.

“That’s what happens. That’s the difference between a varsity program and a club side: you have to perform or you’re not going to be there long.”

Not unlike their male counterparts on campus, Life’s relentless work ethic across the field was too much for Central Florida. The Running Eagles took a 50-0 lead through 40 minutes before outside center Cortney Kuehl put the Knights on the scoreboard in a 78-5 final, imposing a dominance at the breakdown to keep Central Florida from its own positive style of play.

“We were a little late around the base, and that’s what our game is,” Besse said. “They poached balls off of us where they shouldn’t have. We’ve worked harder on getting to the rucks and getting the cleaners and bridgers in quicker. We just have to use our size to our strength and wear people down, and use our speed to get it out wide.

“They went out in the first half [against Life] and didn’t play very well. Second half was better; they just have to work harder on going full speed the whole game.”

Apart from the high-scoring exploits, the consistency issue has been the story of Central Florida’s season. If they are to finally bring a trophy back to Orlando, Fla., the Knights will need two 80-minute performances on back-to-back days, beginning with a matchup against Davis.

“I think we match up pretty well,” Besse said of his side’s Semifinal proposition. “They may not be used to the kind of physicality we bring because we’re a really big side in comparison to most sides in the country. I’m not changing anything – we’re just going to try and wear them down. First half: put the pounding on them; second half: open them up.”

It is all or nothing for several Knights tired of not advancing to the latter stages of the playoffs, skipping graduation this weekend for a chance to play for a Spring Championship. Kuehl and USA Falcon selection Jessica Warner will hope to assist in the effort in the back line by finishing off opportunities created by a forward pack led by co-captain props Sara Karuli and Julia Phillips.

Notre Dame College and Stanford kick off the College 15s National Championships at Life University’s Lupo Family Field with a 10 a.m. ET Semifinal kickoff. Central Florida and Davis will follow at noon ET, before the winners meet in the Spring Championship Final Saturday, May 6, at 3:30 p.m. ET. Tickets for the event can be purchased online starting at $10 per day, with those unable to attend in person can watch the event live on The Rugby Channel.