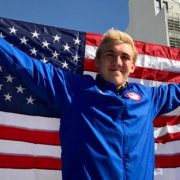 Cleary’s rugby career has rocketed over the past year. He was selected to the USA Rugby Boys High School All-American Team that played in the Youth Olympic Games qualifier and Can-Am Future Sevens tournaments, where his performances earned him a place in training camp alongside the senior USA Men’s Eagles Sevens. From there, Cleary was chosen for the USA Men’s Falcons team (one level below the senior program) where he represented Team USA in the international RugbyTown Sevens tournament. He has since been named co-captain of the 2018 U.S. Youth Olympic Men’s Rugby Team.

“It means everything to me to be able to come here and represent our country. Carrying the flag for our team is a huge honor and it is going to be amazing,” Cleary said. “Being here with all of my teammates, my family, the Opening Ceremony is going to be an unbelievable experience.”

Cleary has also competed in football, wrestling, ski racing and is a self-proclaimed expert ballroom dancer. He started playing rugby in 2012 and will compete for Team USA in Buenos Aires beginning on Oct. 13.

The Youth Olympic Games, first hosted in 2010, are an international multi-sport event held every two years, consistent with the current format of the Olympic Games. Buenos Aires 2018 is the third Summer Youth Olympic Games and will feature 241 events across 32 sports. Approximately 4,000 athletes from 206 nations are expected to participate in the 12-day competition for athletes between the ages of 15 and 18. The 87-member U.S. roster is comprised of 47 men and 40 women, representing 21 sports.