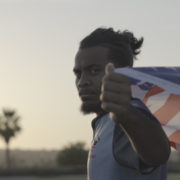 MADRID – With the Youth Olympic Games Buenos Aires 2018 just around the corner, the Olympic Channel invites viewers on a journey around the world in search of the Olympic champions of tomorrow in Heroes of the Future. The twelve-episode original series premieres worldwide on Monday, 24 September on the Olympic Channel global digital platform, and is available on-demand at olympicchannel.com and its mobile apps.

The all new season of Heroes of the Future features 12 young athletes from 10 different countries who are already considered amongst the best in their respective sports. These young game changers represent Olympic hopefuls in 12 different sports including football, boxing, gymnastics and athletics, as well as sports on the Youth Olympic Games programme including sport climbing, breaking and roller speed skating.

Episodes include the story of Valentina Aguado, the sport climber from Argentina who started climbing when she was nine-years-old. Now 16, she dreams to become the first medallist for her country in sport climbing. Valentina will be representing Argentina at the upcoming Youth Olympic Games in Buenos Aires, where she will have her first opportunity to make her dream come true.

“When we start thinking about dreams and goals we always strive for the best, and my dream it to one day being able to stand on an Olympic podium,” said Aguado. “Sport climbing is growing in popularity and I would like to grow with it and be able to reach my fullest potential and represent my country in the best way I can.”

This season of Heroes of the Future also presents Inoke Junior Waqavesi, an 18-year-old from the United States who is already one of the world’s top athletes in rugby 7s. Although one of his highest dreams is to one day become the captain of the U.S. Men’s National Team known as the “Eagles”, he has his sights on competing at the Tokyo Games in 2020.

“My biggest dream for the sport of rugby 7s is to become an Olympic athlete,” said Waqavesi. “That’s pretty much any athlete’s dream, to walk and represent your country in the Olympics. I just want to make an Olympic scene and hopefully get my country a medal.”

“We are excited to introduce these Olympic hopefuls in this inspiring and entertaining season of Heroes of the Future,” said Mark Parkman, General Manager of the IOC’s global Olympic Channel. “Many of the athletes featured will be competing in the upcoming Youth Olympic Games, and we hope that Olympic fans from around the world will tune in for 13 days of action to watch them compete.”

The Olympic Channel is an over-the-top (OTT) global media destination where fans can experience the power of sport and the excitement of the Olympic Games all year round, and is available worldwide via mobile apps for Android and iOS devices and at olympicchannel.com.

Episode 5 – Lionel Colon, 13, Boxing, (PUR)
His father says he was born to box. Will Lionel Colon be the next athlete to continue his country’s legacy in boxing?

Episode 7 – Carson Foster, 16, Swimming, (USA)
Carson Foster is one the world’s fastest young swimmers. At the age of 10, he broke one of his idols’ records – Michael Phelps.

Episode 8 – Inoke Junior Waqavesi, 18, Rugby 7s, (USA)
Junior is one of the world’s top rugby 7s players. His dream is to become the captain of the Eagles, the U.S. national rugby team.

Episode 10 – Aaliyah Powell, 15, Taekwondo, (GBR)
Spurred on by the athletic exploits of her elder sisters, Aaliyah forged her own path to glory in taekwondo and is set to emulate her hero Jade Jones.

Episode 12 – Jolien Corteyn, 16, Fencing, (BEL)
The current world number one Is the fourth generation of her Belgian family to conquer the world in fencing, but will she add Youth Olympic gold to her vast array of honours?

About the Olympic Channel

The Olympic Channel is a multi-platform media destination where fans can discover, engage and share in the power of sport and the excitement of the Olympic Games all year round. Offering original programming, news, live sports events and highlights, the Olympic Channel provides additional exposure for sports and athletes 24 hours a day, 365 days a year in 11 languages. The Olympic Channel was launched in August 2016 in support of the IOC’s goal, set out in Olympic Agenda 2020, of providing a new way to engage younger generations, fans and new audiences with the Olympic Movement. Founding Partners supporting the Olympic Channel are Worldwide TOP Partners Bridgestone, Toyota and Alibaba. The Olympic Channel is available worldwide via mobile apps for Android and iOS devices and at olympicchannel.com.