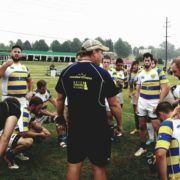 GLENDALE, Colo. – There has never been a club to win consecutive Men’s Division III National Championships, and that tradition will continue in 2017. A year after the Fairfield Yankees beat the Euless Texans for the D3 title, the Bremer County Bucks and St. Louis Royals will have a chance to win a first National Championship trophy for their clubs Sunday, June 4, at Infinity Park in Glendale.

The 2017 Men’s Division III National Championship Final will kick off at 11 a.m. MT and be broadcast live on The Rugby Channel.

Both of the 2017 D3 finalists had their 2016 seasons ended by an eventual National Championship finalist. A pair of wins at the Frontier Playoffs qualified the Royals for the National Playoffs in Tucson, Ariz., where the 2016 runner-up, Euless Texans, narrowly escaped St. Louis in the Quarterfinals.

Bremer County, on the other hand, made it one game further than its National Championship opponent. After a win over the Savannah Shamrocks in the 2016 National Quarterfinals, the Bucks did not have enough left in the tank to win a Semifinal the very next day against Fairfield. Given the historic and recent success of Sunday’s D3 finalists, neither will be satisfied with a second-place finish and will want to return home with National Championship-winning hardware.

One reason the Royals have surpassed their recent results to book a spot in the two-day, five-match National Championship weekend is their recent work with a consulting group – Rugby Consulting USA. The company, co-owned by St. Louis fly half Tadhg Leader, has “simplified our offensive system and worked with us to develop a team defense that is much more effective than in the past,” according to head coach Steve McKinstry.

Individual players have managed to step up their games, as well. Leader continues to push all of the right buttons in the back line, while wing Mike Compton and center Ty Turner are legit scoring threats. In the forwards, the loose trio is a real strength for St. Louis. Eight man Shea Carr keeps the team on the front foot, while blind side flanker David Shipman’s relentless tackling inspires the defense around him.

Like the Royals, Bremer County has been steamrolling the competition put in front of it this season. The Bucks beat up on Midwest foes by an average of 55 points per contest before besting Lehigh Valley and Southern Pines by a combined 130-58 in the National Quarterfinals and Semifinals. A lack of experience in tight ball games might worry some teams heading into a National Championship Final, but Bremer County is not too alarmed.

“I don’t think we can let that concern us too much,” said Bucks Head Coach Jesse Sathre. “We’ve had some very lopsided final scores, but many of those matches started out close. Typically, we’ve had close first halves until our bench depth takes over the game and we’re able to continue pushing an intense pace into the second half where teams haven’t been able to hang, and we pull away in a big way.”

Bremer County’s talented bench might have been acting as the final nail in the coffin this season, but there are plenty of playmakers in the first XV that will need to be marked this Sunday. The center pairing of Casey Hansen and Deandre Moore are especially worth a game-planning session. Hansen is a physical load in the No. 12 jumper who garnishes a lot of attention, but so, too, should his running mate in the centers. Moore, who has been especially good in the postseason, can rip off a big run when needed.

But like so many teams, success in the back line starts and ends with the team’s scrum half. The Bucks’ No. 9 is Eric Whitcome and he has “been doing a great job at scrum half and being a real leader for the team on and off the field,” in Sathre’s opinion.

Fans of a physical brand of rugby will want to tune in to The Rugby Channel for this one. Neither team lacks size and even the clubs’ smaller players pack a punch in the tackle area.

“Bremer County looks very physical and quick to capitalize on mistakes,” said McKinstry. “We must be able to stop them with one-on-one tackling, and make them go around and not through.”

The Bucks coaching staff has similar concerns of their National Championship opposition.

“St. Louis is a big team that does a good job of spreading the field,” Sathre added. “Obviously, they’re skilled to make it this far. They’ve been winning by large margins – similar to us. We’re not afraid to play a physical game, so I think we just need to continue to make our tackles on them and run at them until they don’t want to hit us anymore.”