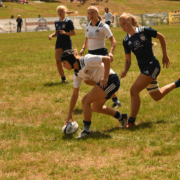 CHULA VISTA, CA. – Dates and a location have been set for USA Rugby’s Girls and Boys High School All-American (HSAA) winter camps, hosted at the U.S. Olympic Training Site in Chula Vista, CA. Assemblies will take place from Dec. 27-31 on the Girls side and Dec. 26-31 on the Boys side, with invitations for both sent this September.

The girls camp will see U18 and U19 teams compete in intra-squad play, allowing all teams to face the best players in their age-group. The boys camp will have two U18 teams and one U19 team face Canada’s U18 and U19s as part of the North America Four competitions. Boys matches will take place Dec. 28 and Dec. 31 with additional information for both camps provided closer to date.

Over the past several weeks, coaches have been evaluating player performances from the recent Regional Cup Tournaments (RCTs) to identify athletes who reflect the best U18 and U19 players in USA. The RCTs serve as the core talent identification competition for players at the high school level. Participants from previous age-grade assemblies and national competitions are also being considered, with both programs inviting more than 150 players combined.

“We are working to select players who not only have the physical ability, basic skills and game understanding to contribute on the field, but also the mindset that will allow them to excel as they move through the development pathway,” says Martha Daines, Director of Girls High School All-Americans and Talent Identification. “The intra-squad matches will provide a good testing ground for the players while allowing the full pool to work together toward the improvement of all.”

“As we evaluate players for the North America Four, we’ll look for athletes with the requisite physical, mental and emotional foundation; as well as the functional rugby skills to perform at the top level,” said Brendan Keane, Director of Boys High School All-Americans. “While we aim to select players who will be successful against their Canadian counterparts, this is an opportunity to identify and develop athletes who project as future Junior All-Americans and Eagles.”

In addition to playing full matches, Winter Camp will see all athletes work directly with coaches to build on core skills and form individual development plans for future progression.

As a whole, the Girls and Boys High School All-American programs set out to identify and develop under-18 and under-19 players who show the potential to reach Junior and Collegiate All-American levels; as well as senior national teams in the future.

Financial contributions from the greater community are crucial for young athletes to continue their journey to becoming Eagles. To support the All-American program, click here.

A comprehensive schedule for the 2018 Girls and Boys High School All-American Winter Camps will be released closer to date.