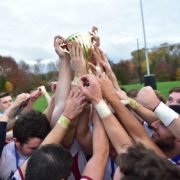 Men’s D1AA kicks off their fall playoffs this weekend, with quarter-finals on Saturday and semi-finals on Sunday. There are plenty of interesting matchups this weekend, and with the defending champions, Notre Dame College, making the jump to D1A, the competition is wide open.

Bowling Green enters the playoff as the number one seed, after finishing 2nd last season, they arrive in South Carolina as favorites to win in 2017. After holding off Western Michigan 37-12 in the MAC Championship Game, they finish atop the Mid-America Conference.

James Madison will line up on the other side of the pitch. JMU placed 2nd in the Chesapeake conference and have qualified as the 8th seed for the tournament. They revel their chances to cause an upset, after an impressive hit out against Virginia Tech last weekend helped them qualify for the playoffs. The season has had a few bumps along the way concedes JMU coach Mark Lambourne: “We started very slowly this season and basically have under-performed due to a variety of issues but over the last several weeks we have started to play with confidence”. Some of those issues stem from “Over confidence”, but some have stemmed from “freak injuries to our backline”; however, the team is “adaptable”, Lambourne reiterates, “We have gone through numerous changes in personnel and position as we… establish starters and finishers.” When asked about their opponents Lambourne complimented them: “They are a strong side used to winning.” Lambourne believes that the team’s hard work over the last few weeks will have them where they need to be come Saturday, but the key will be in the execution. It’s shaping up to be a fast and dynamic game.

The winner of Bowling Green, JMU will then go on to play the winner of Tennessee vs St Joe’s.

Tennessee is coming off one of their better years in recent memory, after having compiled a 7-2 record through 2017, their two losses came at the hands of Kentucky. Between their first and second loss they showed remarkable improvement, narrowing the margin of defeat by 20 points. Due to scheduling issues this is the first time Tennessee has been able to compete in the Fall College playoffs. Head coach Marty Bradley stated: “This is an exciting time, and the players are looking forward to the travel this weekend.” When asked about the game on Saturday Bradley was full of praise for his opponents: “Preparing for them [Saint Joe’s] is like playing South Carolina with the Kentucky’s fly-half. They have a very accomplished fly half and they like to play from sideline to sideline…we’ll have to build up pressure on them in all phases.” This shouldn’t be an issue for Bradley’s side as he believes pressure and tackling are two of the main strengths his side possess.

St Joseph’s are coming off an impressive season where they took out top place in the Mid-Atlantic conference after storming through the regular season and post season competition. St Joe’s amassed an impressive 130+/- during their three matches in the post season. Daniel Yarusso, head coach for St Joe’s, was quick to praise Noah Niumataiwalu: “I think Noah Niumataiwalu…is seeing the field really well and doing a good job managing the guys from the fly half position.” However, despite their high-flying offense, they are still only one rank higher than Tennessee so they will have their work cut out for them on Saturday, and Yarusso admitted it: “I think they are going to be tough and battle tested.  We certainly will have our hands full.” This game should be a nail biter.

In Men’s D2 we pick up action in the round of 16 where the Mid-Atlantic region appears to have some of the more compelling match-ups of the week. The first game of the weekend from the bracket will be UW Whitewater, the defending champions, coming up against Pittsburg State, a team that didn’t make the tournament last year, but has a compelling story to tell. The winner of that game will face the winner of Grand Valley and UW Milwaukee, in what will be a tightly contested match up.

UW Whitewater is coming into this year’s bracket as favorites to repeat as champions, and rightly so. They went through their conference unscathed this year on average scoring 70 points whilst only conceding, on average, 7 points. Despite their success Whitewater’s coach Pat O’Connor doesn’t believe they’ve peaked yet describing the season as a “building process” adding, “We’ve had a depth of quality players this year.” O’Connor believes the trials and tribulations the team has gone through since their first win in 2011, until their championship victory last year taught them important lessons, namely team play: “People who win are committed to team and not to self”. In a sign that does not bode well for Pittsburg, when asked about this year’s team O’Connor simply replied; “This team, as last year’s, plays as a team.”

Pittsburg State on the other side of the coin, is a team that has overcome a great deal of adversity, when last year they lost their former captain, Pat Mercer, to a horrific car crash. Since the loss of Pat, Pitt State found a new sense of determination culminating in a desire to win and play on the national stage. Brian Peery, Head Coach of Pitt State, stated: “The team made it their goal to make it to the national championship.” They’ve put words into action ramping up their trainings from twice a week to four times, and according to Peery when they’re not on the field or in the class room they are watching tape, lifting weights or otherwise committing themselves to the game. However, on their way to achieving their goal, they face a major test first up in UW Whitewater. This doesn’t faze Pitt State according to captain Grant Schultz “We’ve been the underdogs always… The team is ready to rise to the occasion.” This will no doubt be a game full of emotion on Saturday, and one that won’t disappoint.

Grand Valley State and UW Milwaukee provides an interesting dynamic as both teams bowed out in the round of 32 last year; and will be looking to make considerable improvements in this year’s tournament. Grand Valley State’s journey has been about consistent and steady improvement according to assistant coach Lance Hohaia “This year’s result has been built over the last 2-3 years, the belief in the team has grown and everyone is playing well and injury free.” After leaving the play-offs last year with a bitter taste in their mouths Grand Valley “spoke early about the feeling of loss and not achieving what they hoped” Hohaia also stated that the coaches drilled that into them every session. The bitter taste has clearly lingered as Hohaia noted that the team is “resilient” this year. “We played some games last year where they [the players] didn’t quite tough it out enough. This year they’ve always come out on top.” They will definitely need to rely on their resilience this week if they are to improve on last year’s result.

Milwaukee, similarly to Grand Valley is a team that has been improving over the years. With a large increase in the commitment from the players being seen as they dedicated themselves to their craft during the off-season whether it was playing 7s in the spring or playing for a local club in the summer. But, there is no bigger indicator of their improvement than their depth across the board. Coach Mark Shank described it as being “The first year in a while where we’ve had a solid 23 across the board.  In previous years, we’ve struggled to even have 23.” This depth has allowed Milwaukee to play a “Dynamic” style of rugby. “Over the last few years we’ve moved away from a single style and developed a dynamic approach.” Shank was also quick the praise the “drive” of his players, applauding their ability to “improve and rebound” after tough losses earlier in the year. They will be hoping that they have enough drive left in them for a long championship run.