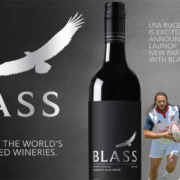 Barossa Valley, Australia – BLASS Wines, the newest Australian wine entry to hit the U.S. market, was announced today as official partner to USA Rugby and Rugby World Cup Sevens 2018. The popular wine selections will be featured at sponsored events before and during the world tournament in San Francisco.

Starting in February 2018, USA Rugby and Ruby International Marketing are excited to host a series of BLASS-sponsored events aligned with USA Eagles test matches featuring three BLASS bottlings – a Reserve Release Chardonnay, Shiraz and Red Blend. In developing the partnership, Rugby International Marketing was inspired to include international elements off the field, as the world gathers in the US. Fans can expect on-site tasting and brand experiential opportunities, VIP/hospitality suites, player appearances, rugby demonstrations, after-parties and more.

“We’re thrilled to be an official partner with USA Rugby and the Rugby World Cup Sevens, which have a natural affinity with our brand,” noted Emma Brown, Senior Brand Manager for BLASS in the Americas. “Founding winemaker Wolf Blass pushed the boundaries of his craft by pioneering a bold and approachable wine style that revolutionized the Australian wine industry, captured the country’s most prestigious wine awards and earned him a permanent place in Australian winemaking history. We see these same core values of boldness, imagination and a relentless pursuit of excellence embodied in USA Rugby and we’re excited to be a part of it!”

USA Rugby CEO, Dan Payne adds, “As rugby continues to gain momentum with U.S. consumers, establishing a stronger connection with current fans, and attracting new ones is fundamental. We are excited to have a dynamic partner in BLASS wines, helping to raise awareness for the sport while bringing an added interest and experience to match days.”

BLASS wines are available at better chain retailers, independent wine retailers and restaurants in major markets around the US. BLASS is imported and marketed in the U.S. by Treasury Wine Estates. For additional information, please visit: www.blasswine.com, www.tweglobal.com or www.wolfblass.com.

About BLASS Wines
BLASS wines are the latest introduction from Wolf Blass, one of the most iconic names in Australian winemaking.  The stylish yet approachable bottlings take inspiration from pioneering winemaker Wolf Blass, who emigrated from Germany to Australia in 1961 and in short order pushed the boundaries of Australian winemaking by introducing a bold-flavored, eminently drinkable wine style that revolutionized the way Australians enjoyed wine.  Along the way, he also earned a permanent place in that country’s winemaking history with numerous awards and accolades and legions of fans the world over.  Made to the highest quality standards by the winemaking team at Wolf Blass winery, each BLASS wine is crafted with fruit from some of the most sought-after vineyard blocks in South Australia.  The classic bottlings harness the charismatic, confident and triumphant spirit of their founder in wines that are unmistakably BLASS. Read more on BLASS.

About Rugby World Cup Sevens 2018
World Rugby granted USA Rugby hosting rights of the largest international sevens tournament in 2015. USA Rugby is leading the planning and delivery of this international tournament in San Francisco working in partnership with World Rugby, local partners and officials. The Rugby World Cup Sevens 2018 Championship will be played in the iconic AT&T Park, featuring the best 24 men’s and 16 women’s teams from around the world. For more information, visit www.rwcsevens.com.