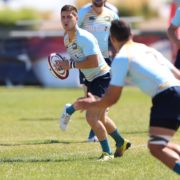 LONG BEACH, Calif. – Sunsplash 7s is one of Southern California’s premier sevens events of the summer. Of course, any time previous Club 7s National Champions Belmont Shore, Old Mission Beach Athletic Club, and San Diego Surfers share the same pitch on the same Saturday afternoon, you are likely in for a quality day of rugby.

In the contest to claim the two spots for Nationals reserved for the Pacific South Region, the three usual suspects from Southern California currently sit at the top of the men’s standings. Belmont Shore has created a gap between first place and the rest of the field after winning each of the region’s opening two qualifiers. The fast start to Belmont Shore’s summer has been especially impressive given its 15s season lasted into late May thanks to a run that led the team to the Division I National Semifinal.

One player in particular that has played a role in Belmont Shore’s successful first half of the sevens season is Sione Masoe. The former High School All-American is coming off of a stellar 15s season in which he starred as the team’s open side flanker, but has shifted to the centers in sevens – giving the squad a dynamic combination of power and speed in the midfield.

Behind the boys from Long Beach are OMBAC and Santa Monica, with each squad having earned one second-place finish. Both teams could potentially be caught by Division III side Orange County Ravens, which are part of an increasingly improved group of Southern California teams in the bottom half of the Pacific South standings.

“These teams are good,” said Belmont Shore 7s Head Coach and former Eagle Peter Sio. “I’ve spoken highly of the OC Raven boys in the past because I’ve seen them grow. But this year what I’m seeing is more consistency from those teams.”

Being a three-time National Champion that is also riding a streak of 10 consecutive years qualifying for the Club 7s National Championship, Belmont Shore expects to win every tournament it enters. Still, Sunsplash 7s is the club’s host tournament, and comes with additional pride to be the last team standing at the end of the day.

“The plan is to always win your own tournament,” Sio explained. “It’s always huge for our fan base here at home and for the boys, and this Saturday is no different. So, we’re filling two solid qualifying teams and we’re hoping for a Finals meetup between the two.”

High expectations aside, it will not be an easy task to get just one of the two Belmont Shore sides into Saturday’s Final. OMBAC has its own rich history of performing well on the sevens national stage, having won six of its own National Championships in the Olympic code of the sport. However, OMBAC has not made a National Championship appearance since 2013, and is desperate to cling onto the second Pacific South seed to Nationals it currently holds.

Meanwhile, Santa Monica has qualified for Nationals each summer since 2014, and has plans to make its first Cup Quarterfinal since 1990.

The Surfers do not appear to be in any danger in missing out on the Club 7s National Championship for the first time ever. The two-time National Champions won June 24’s Beach City 7s, and simply need to reach the Final at Sunsplash to guarantee yet another trip to Nationals.

The 2016 Women’s Premier League Champions have been forced to find a few new playmakers, though, with Surfer stalwart Kara Mathews taking the summer off and scrum half Deven Owsiany vying for a place on the Eagles’ Women’s Rugby World Cup squad.

A year after making its first appearance at the Club 7s National Championship, Tempe has the inside track to claiming the women’s Pacific South’s No. 2 seed to next month’s championship event in Minneapolis, Minn. The Ninjas will have to hold off Santa Monica in order to improve on its 1-5 record at last year’s Nationals. The Dolphins have a history of reaching the National Playoffs in 15s, but have yet to put its stamp on the Club 7s National Championship.