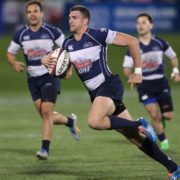 LAFAYETTE, Colo. – Twenty-four men’s club rugby teams are still in the running for three National Championships. Half of the eight remaining teams from Divisions I, II, and III are prepping for May 20-21 National Quarterfinals at Founders Field in Pittsburgh, while the other postseason qualifiers will attempt to keep their seasons alive at the Kino Sports Complex in Tucson, Ariz., over the same dates.

The two teams from each division capable of fending off challengers in the Quarterfinals and Semifinals will play for a USA Rugby National Championship June 3-4 at Infinity Park in Glendale, Colo.

Both the East and West Playoff fields produce matchups between recognizable clubs with players that fans of elite-level club rugby and our Men’s Eagles will be familiar. Rocky Gorge’s first season at Division I was brilliant during its undefeated conference season, but the team’s National Playoff run stalled prematurely. The club’s second year of D1 rugby has been just as dominant and Rocky Gorge will be fired up to test itself against the Midwest’s best – Chicago Lions.

After a rocky fall, the Lions righted their ship in the spring. Chicago’s lone defeat since the New Year came against a resurgent Columbus Rugby side that led the conference’s standings table throughout the season. The Lions would get the final laugh in the Midwest, scoring the final 18 points in the conference championship game to down Columbus, 33-20, and advance to the National Round of 8.

Pittsburgh’s other Quarterfinal pits the 2015 National Champion, New York Athletic Club, versus last year’s Division I winner, Mystic River. In fact, it was Mystic River that ended NYAC’s hopes of defending its title. Since then, NYAC has been in incredible form, including three wins over Mystic River since October by an average of 19 points. Still, do not count out the 2016 National Champions. Since its April 22 loss to NYAC, Mystic River has hammered the Boston Irish Wolfhounds, 81-10, and hung tight with a very good Glendale Raptors team last weekend.

With no rendition of the Pacific Rugby Premiership this spring, the West Coast’s club game got an injection of additional competition this season. Belmont Shore and San Francisco Golden Gate beat PRP rivals in Southern California and Northern California, respectively, to reach the National Round of 8.

Golden Gate will square off against an Austin Huns team that won the Red River Conference and have further challenged themselves with a pair of friendlies against the Glendale Raptors. The Huns will be fortunate to have those additional outings before getting mixed up with San Francisco Golden Gate. The NorCal champs are undefeated with each of their wins coming by double digits. Last week Golden Gate put a whooping on Oregon Sports Union, 90-0, to claim a spot in the Quarterfinals.

The only team in Northern California capable of beating Life West was San Francisco Golden Gate. The second-place finish in the Bay Area earned the Gladiators a play-in match against Red River’s second best – Austin Blacks. Life West prevailed and draws Belmont Shore for its efforts. The club from Long Beach, Calif., stood tall over a very tough Southern California Conference. None of Belmont Shore’s 11 wins were harder than its victory in the conference championship match against Old Mission Beach Athletic Club. The two SoCal rivals traded leads on multiple occasions before Belmont eventually prevailed, 31-28.

The Tempe Old Devils’ move up to Division I means a new champion will be crowned this year in Division II. The 2016-Finalist Detroit Tradesmen return to the Round of 8 following an undefeated Midwest season. Since a season-opening tie to the Cleveland Crusaders, the Tradesmen have won 10 games straight against Midwest opposition, including a 27-12 victory over Wisconsin Rugby to reach the Round of 8.

Next up for Detroit is the Washington Irish. The Mid-Atlantic South Champion has only one loss to its name, but, since its defeat at the hands of Northern Virginia, the Irish have avenged the loss to NOVA and succeeded in regional playoff matches against Old Gaelic Rugby and the Philadelphia Whitemarsh.

One of those teams will face off against the winner of the May 20 Quarterfinal between Life University and the Morris Lions. Life has been out of the club playoff scene since winning a Division I National Championship in 2014. The Running Eagles return to the National Playoffs as the South’s representative thanks to one-sided wins over the Boca Raton Buccaneers and Miami Tridents. The Lions from New Jersey proved to be the Empire’s best Division II team. Aside from an early season test from Monmouth, Morris dominated its way to regional playoffs before receiving quality opposition from the Village Lions and Mystic Barbarians. Still, Morris proved too strong and is now two wins from a National Championship appearance.

A season after falling to Boulder Rugby in the Frontier Playoffs, the St. Louis Bombers beat the top two teams from Rocky Mountain, Denver Barbarians and Glendale Raptors D2, to advance to the Round of 8 where they will face the Ventura County Outlaws.

After a 3-4 start to its season, Ventura County has won five consecutive games before it beat the Las Vegas Irish and Red Mountain Warthogs in regional playoff matches, the latter coming in an impressive 39-10 performance by the Outlaws.

The Little Rock Stormers will hope to improve on last year’s Round of 8 finish when they meet the Sacramento Blackhawks in Arizona in the Quarterfinals, the same round and location Little Rock’s season came to an end in 2016. The Stormers were once again unbeaten at home this season before winning a pair of regional playoffs matches against Austin Blacks D2 and Tulsa Rugby.

The Blackhawks’ sluggish 2016 season in Division I had the writings on the wall for a move down to D2. The move has increased the competition in an already competitive Northern California Division II landscape. After losing to the Sacramento Capitals in March, the Blackhawks beat the Capitals April 22 to set up a date against the Tacoma Nomads. With a place in the National Quarterfinals on the line, the Blackhawks outplayed the Nomads to the tune of 47-26.

A year after reaching the National Semifinals, the Bremer County Bucks have their sights set on the June 4 Division III National Championship game at Infinity Park. The Bucks ran their record to 6-0 before postseason wins over Wisconsin Rugby D3, Oconomowoc Rugby and the Toledo Celtics. Bremer County will look forward to a quarterfinal challenge from the Lehigh Valley Hooligans after posting each of its nine wins by more than two converted tries.

The Hooligans are in the midst of an impressive 14-0 season. Not only has Lehigh Valley beaten everyone that has been put in front of the team, the club has done so convincingly, with all but three of its victories coming by double digits. Most recently the Hooligans marched past James River, 24-15, to reach the Quarterfinals.

A National quarterfinalist in 2015, Southern Pines returns to the Round of 8 after missing out on the big dance last year. Aside from a one-point loss on the road to a very good Charleston Outlaws team, Southern Pines is undefeated during the 2016-17 season. May 6-7 wins against the Montgomery
Yellowhammers and the Gainesville Hogs by a combined 80-29 score line were plenty good enough to send Southern Pines back to the National Quarterfinals.

The 2015-16 New England Division II conference was not kind to Saratoga Rugby, which won just two games. This season in Division III, Saratoga is undefeated. The club’s most recent win was by far its most impressive, claiming a one-point nail-biter against last year’s D3 National Champions, the Fairfield Yankees.

Like Saratoga, the Chico Mighty Oaks were playing Division II rugby a season ago, but thought a move to D3 was better for the club. A return to Division II could be in the works for the Mighty Oaks if they continue their current tear. The team has not lost a game all season, and aside from a two-point win over Google Rugby in April, the teams ran rampant through its conference competition. To reach the quarterfinals, Chico downed the Eugene Stags, 14-10.

The San Marcos Greys’ 2016 season was ended by eventual National Championship finalists Euless Texans. This spring Euless is playing Division II, leaving the Greys to beat Houston United D3 and Shreveport convincingly in regional postseason contests to reach the National Round of 8 to play Chico.

A 2016 Mid-America title and two Frontier Playoff wins placed the St. Louis Royals in the National Quarterfinals where the Euless Texans ended their season. The 2017 season produced another Mid-America title for the Royals, and a 50-17 victory against the Wichita Barbarians has St. Louis back in Tucson for the Round of 8.

As they did in 2015, the Orange County Ravens had an undefeated regular season in 2017. The Ravens have been strong on defense, but their attack has produced at least 30 points in each of their 11 competed games, and notched no less than 50 points in eight of those contests. Following a 32-24 victory at Santa Fe Santos’ expense, Orange County will do battle with St. Louis May 20 in the Quarterfinals.