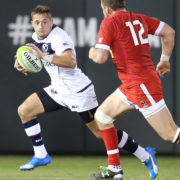 BURNABY, British Columbia – Week Three of the Americas Rugby Championship sees the USA Men’s Eagles travel north of the border for their first away match of the tournament, scheduled for Saturday, Feb. 18, against Canada at Swangard Stadium.

Captain Todd Clever returns to the starting XV following Head Coach John Mitchell’s squad’s eight-largest victory in U.S. history against Brazil in Austin, Texas. The Eagles are tied on standings points with Argentina XV, gathering eight victory points and a bonus point in two wins after two weeks of the five-week competition. Saturday’s match will kick off at 8 p.m. ET, with the live broadcast available on The Rugby Channel to valid subscribers.

“At the end of the day there’s total respect for Canada,” Mitchell said. “They have set the bench mark in North America in Rugby World Cup Qualifying years for a long time now. It’s important for us to perform well.”

In the first year of the ARC, the Eagles defended home soil at Dell Diamond with a fourth consecutive defeat of Canada. Clever recorded a hat trick in the win – his single-best offensive output in a U.S. jersey – which featured four players in the starting XV that will line up across from the Canadians this Saturday. Overseas professional Cam Dolan began his four-week tour with the Eagles with a try in a substitute appearance against Brazil, and moves into the starting lineup at No. 8 behind Clever and one of the ARC’s leading try-scorers, Tony Lamborn.

The second-row combination of Nate Brakeley and Nick Civetta has used its collective height and skill sets to set the Eagles up for offensive success in the opening weeks of the ARC. Devastating to opposition in the set pieces, the locks have also been given free rein to roam the midfield with ball in hand, leading to multiple tries last weekend. Both Eagles will leave camp following the British Columbia trip.

Wheeling Jesuit University’s Peter Malcolm debuted on the international stage at hooker against Uruguay and will start at hooker over James Hilterbrand, U.S. captain in Austin. Mitchell’s rotation of the front row continues as Chris Baumann and Anthony Purpura replace Saturday reserves Ben Tarr and Dino Waldren, with the scrum more than holding its own against centralized South American opposition thus far.

“In terms of this contest, getting our front-row mixes right is important,” Mitchell said. “We’re into creating healthy competition, which wasn’t always the case in year one of the ARC. Both sets will play vital roles in the match. It’s not that one person’s ahead of the other, but more around the strategy of our groupings.”

Will Magie will support Shaun Davies from the fly half position for the second weekend in a row. The latter’s third cap – as well as injuries to squad members Luke Hume and Andrew Turner – again moves Nate Augspurger out to the wing, where he utilized the speed and skills that helped him earn a reserve spot on Team USA’s Rio 2016 Olympic Summer Games squad last summer to break the gain line on several scoring attacks against Brazil. Ryan Matyas will line up along the opposite touch line in his first appearance for the national team since last year’s ARC outside centers Bryce Campbell and JP Eloff. Mike Te’o will make the calls from the full back position.

New to the assembly due to the 26-player match-week training assembly requirement, David Tameilau will be available to the Eagles on the bench. Siaosi Mahoni could make his senior international debut having recovered from an injury that has kept him out of the lineup in the first two weeks.

“Working with a limited squad of 26 and reacting to injuries, we’re genuinely trying to give most people a week in before they get a start,” Mitchell said. “It’s kind of like trying to balance all balls; getting a look at some people that we haven’t seen a lot of because clearly this match is going to be a lot different than what we’ve played so far with conditions and, naturally, the rivalry between to the two countries.

“We’re just focusing and concentrating on our processes. Guys understand what’s coming. As a result of this performance and the next two weeks I’m going to solidify my Rugby World Cup Qualifying group. It’ll give me a good indication of how resilient people are away from home.”

Canada opened its ARC campaign with a loss to reigning tournament champion Argentina XV on a wintry night at home before a similarly-cold encounter with Chile brought the Canadians joy in their 100th test victory. In the rivalry series, Canada holds the upper hand against the U.S. with a 38-1-16 record in addition to a 24-6 record when playing at home. Saturday’s match will be the first of three between the bordering nations this year, with the top two teams in Rugby Americas North set for a Rugby World Cup 2019 Qualifying series this summer.

Kickoff at Swangard Stadium is scheduled for 8 p.m. ET. The live broadcast of the match will be available to valid subscribers of The Rugby Channel, while USA Rugby’s Twitter account (@USARugby) will provide live match updates throughout the 80-minute game. Visit the Americas Rugby Championship page on USARugby.org for updated standings, schedules, and statistical information.