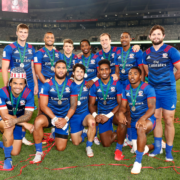 COLORADO SPRINGS, Colo. – The United States Olympic Committee today announced finalists for the Team USA Awards presented by Dow, Best of December, which recognize the outstanding achievements of Team USA athletes from last month. Fans are invited to vote for their favorite athletes and teams at TeamUSA.org/Awards through midnight Tuesday, Jan. 8.

Male Athlete of the Month

Andrew Anderson (Holly, Michigan), Bowling
Won five medals – one gold, three silvers and one bronze – at his first world championships in Hong Kong, rolling a perfect 300 game during singles qualifying, one of only two perfect games rolled during the tournament.

Dan Cnossen (Topeka, Kansas), Para Nordic Skiing
Won six medals – four golds and two bronzes – at the world cup in Vuokatti, Finland, securing a medal in each event in which he competed.

Female Athlete of the Month

Team of the Month

Each National Governing Body may nominate one female, one male and one team per sport discipline. An internal nominating committee selects finalists to advance to the voting round. Votes received from NGB representatives and select members of the media account for 50 percent of the final tally, with the other half determined by online fan voting via TeamUSA.org/Awards.