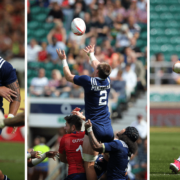 With a first match kick off scheduled for 12:50pmPT on Saturday, the United States Men’s Sevens will take the field for the first time since finishing a record best 5th place in the 2016-17 HSBC World Sevens Series last May.

While not a World Series tournament, Head Coach Mike Friday refuses to dilute the competition, “We are under no illusion how tough a tournament like this will be. With the quality of countries that are attending it will provide exactly the test we need, as we move closer to Dubai.”

The United States falls into Pool C, squaring off against Tonga, New Zealand and Chile.

“We have had a good week’s preparation so far, which has been very intense for the squad as well as competitive.” Continued Friday, “This is an experienced squad with a sprinkling of new players who have performed well this pre-season and earned an opportunity to play.”

Fresh faces coming out camp include Chris Mattina and Joe Schroeder who impressed during the pre-season. Schroeder’s development has been recently showcased as part of The Rugby Channel feature, Homegrown, where the former collegiate cheerleader discusses his transition back to rugby.

Ultimately, the Men’s squad looks forward to a pre-series challenge of the highest caliber and most importantly, competition on home soil. “As always, we as a team want to perform, especially when playing in front of our home crowd,” concluded Friday, “we will be going all out to try and win every game we play in.”