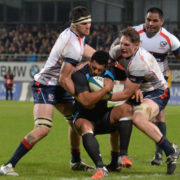 The 18,000-seat Avaya Stadium will host Canada and Japan in a 5 p.m. PT matchup Saturday, July 18, before the USA Men’s Eagles challenge Samoa under the lights at 7 p.m. PT. The match takes place nearly two months to the day prior to the teams’ head-to-head fixture in Pool B at Rugby World Cup 2015.

Tickets for the first international rugby match at the home of the San Jose Earthquakes, the newest stadium in Major League Soccer, are available from $15 – just $7.50 per test.

Bonney Field’s second-ever event was last year’s Pacific Nations Cup match between the Eagles and Canada, and the renovated stadium at Cal Expo has an increased capacity to hold nearly 11,000 fans for this year’s doubleheader. A Pacific-island clash between Fiji and Samoa at 5 p.m. PT Friday, July 24, will precede the U.S.’s battle with Japan at 8 p.m. PT. Japan is also in the Eagles’ pool at this fall’s World Cup in England.

Starting at $20 for the day, tickets to the two matches in Sacramento can be purchased via Ticketmaster. The California State Fair will be held simultaneously on the Cal Expo grounds, with fans invited to join in both festivities.

Following their stay in the Golden State, the five international sides – as well as Tonga – will travel north, across the border into Canada, to finish pool play at BMO Field in Toronto Wednesday, July 29. The championship, third-place, and fifth-place matches will be held at Swangard Stadium in Barnaby Monday, August 3.

Broadcast details for the four matches in northern California will be released in due course.