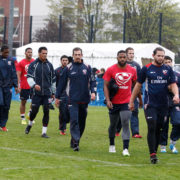 The penultimate round of the Series marks the second time the Eagles have played in the Cup Semifinal and Third-Place matches this season (the U.S. defeated Canada in the USA Sevens Cup Quarterfinal and finished fourth on home soil). With Fiji, New Zealand, and South Africa claiming three of the four automatic-qualifying spots for the Rio 2016 Olympic Summer Games after eight tournaments, and England ahead of Mike Friday’s Eagles by 31 points, the U.S. will have to seek qualification at the 2015 NACRA Sevens Championships next month.

Maka Unufe scored four tries in six matches and was the team’s only representative in the tournament Dream Team, joined by three Fijians, two All Blacks, and Tom Mitchell of Third-Place-Match opponent England.

The Eagles’ start to Day Two at Scotstoun Stadium resembled Day One, which saw rival Canada score early and often in a 40-0 shutout. Pama Fou put Australia ahead in the first minute of the Cup Quarterfinal after finding just enough of a gap between Andrew Durutalo and Madison Hughes 10 meters from the try line.

Australia, still in the hunt for a top-four spot in the Series standings, was unable to find the try zone again in the match. Perry Baker, from his own five-meter line, used his pace and spatial awareness to get past the defensive line before blazing away from Ed Jenkins and the Australian full back for a try in the corner. From the touch line for the toughest conversion available, Hughes stroked the ball through the posts to level the match at 7-7 at the break.

Unufe proved the decider in the match with an individual try worthy of World Rugby’s “Seven of the Best” highlights. Inside his team’s half, the Dream Team selection’s juke around two defenders and step around the full back in Australia’s half saw him score between the sticks to send the Eagles into the Cup Semifinal with a 14-7 victory.

Unfortunately for Friday’s side, Zack Test was taken out of the match in the fifth minute after staying down on the pitch post-tackle. He was unavailable for the remainder of the day.

Eventual Cup Champion Fiji had its closest match of the tournament up to that point in the Cup Semifinal, a 19-5 loss for the U.S. Isake Katonibau opened the scoring in the first minute with quick passing from touch line to touch line allowing the Fijian to beat Danny Barrett in space on the outside.

From a set play on a quick tap in the final minute of the half, Unufe took on two defenders and was able to get an offload to an in-stride Hughes to dot down over the line. The conversion was wide, however, keeping Fiji’s lead at 7-5 at the half.

Semi Kunatani scored twice in the second half as Fiji took advantage of some tired defending with typical Fijian sevens rugby. Barrett nearly gave the Eagles a consolation try on the final play of the match, but a knock in the build-up forced the referee’s whistle.

England’s Cup Final victory at Tokyo Sevens last month was enough to jump ahead of Australia for the fourth spot in the Series standings, and only a loss to New Zealand in the Cup Semifinal Sunday kept what will be Team GB’s representative in Rio de Janeiro out of a second-consecutive Cup Final.

England took out its frustrations on the Eagles with three tries in the first half. Dan Bibby dummied a pass to his winger to get Carlin Isles off balance and put his head down to get to the try zone before the “fastest man in world rugby.”

Mitchell extended the lead with a fourth-minute try and Dan Norton compared his pace to Isles’ to give England a 19-0 lead going into halftime.

It got worse before it got better for the Eagles, with a pass from Matai Leuta that eluded Perry Baker deep in the U.S.’s half giving Norton the easiest try of his career. Baker, who had kicked the loose ball towards his team’s try line on the play, put five points on the scoreboard with a long-range try in the 12th minute.

Holding a 24-12 lead with time expired on the clock, England refused to kick the ball into touch to end the match. The Eagles applied pressure and moved the defense up at each pass, forcing an ill-advised pass that was intercepted by Martin Iosefo for the final try and 24-19 score line.

The Series ends at Marriott London Sevens this weekend, where the U.S., with a fourth-place finish in Glasgow, heads Pool D with France, Portugal, and South Africa. The Eagles’ Twickenham Stadium campaign kicks off against France Saturday, May 16, at 4:22 a.m. ET. Watch the final tournament of the 2014-15 World Rugby HSBC Sevens World Series on Universal Sports.