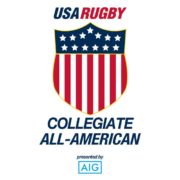 The AIG Men’s Collegiate All-Americans Identification and Verification Camp at the Chula Vista Elite Athlete Training Center has been rescheduled to Jan. 14-16, 2017.

Two-and-a-half years from Rugby World Cup 2019 in Tokyo, the High Performance Pathway is becoming more and more streamlined from the age-grade teams through to the senior Eagles. The MCAA Camp will coincide with the AIG Men’s Junior All-Americans Development Camp at the OTC, further connecting the pathway.

Following a successful AIG Men’s Collegiate All-Americans Tour to Queensland sponsored by WellDog, from which seven young athletes went on to represent the U.S. at the senior level with either the Eagles or USA Rugby Selects, Head Coach Gavin Hickie and staff have been hard at work scouting collegiate competitions throughout the fall. As players – student-athletes – take time away from their programs in December, the staff is calling for nominations from coaches and players for Camp consideration.

Sixty athletes will be selected to attend the assembly in southern California with the initial goal of earning a spot on the MCAA team for the second annual Tour to Queensland sponsored by WellDog in mind. Though only a portion of those in Camp will be named to the touring squad – and a separate portion unavailable for Camp selection due to winter/spring competitions – all participating players will receive feedback from the High Performance staff and have their analytics recorded for future training use.

“The first AIG Men’s Collegiate All-Americans Tour to Queensland sponsored by WellDog provided our collegiate student-athletes with an intense, unique international environment not yet replicable domestically,” Hickie said. “The team and Tour proved to be important stepping stones for full senior Eagles honors for players like Bryce Campbell and Matt Jensen, with many others close to breaking through.

“As part of the USA Rugby High Performance Pathway and working closely with the Junior All-Americans, it is our role to provide our Eagles with the next crop of international rugby players. We are excited to work with this year’s collegiate players who aspire to be part of the 2019 Eagles World Rugby squad.”

Members of the MCAA coaching staff and the Eagle Eye Scout Network will continue to attend collegiate competitions throughout 2017 in the lead-up to the Tour, which is not yet finalized. If a student-athlete is not able to attend the January Camp, he will still be eligible for selection in 2017.

Nominations for the Identification and Verification Camp at the OTC will be accepted until Jan. 1, 2017. For more information, visit the AIG Men’s Collegiate All-Americans page on USARugby.org or contact Coach Hickie at ghickie@usa.rugby.