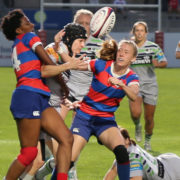 The Emerald City club held a 31-19 lead 10 minutes into the second half before Mother Nature wanted a break, and a late try from Eliza Cioffi set up a race to the final whistle.

Ryan Carlyle opened the scoring by spotting a gap in the Beantown defense about 40 meters from the try zone in the first few minutes of the match. The capped Women’s Eagle fended one defender away from the tackle and used her quick feet to get around two others on her way in-goal.

The converted try was followed by winger Kelsi Stockert’s first try for a 14-0 Seattle lead, but Beantown replied through Samantha Luther after a pick-and-go attack.

Stockert’s second try of the match – helped by a monstrous fend on the wing at midfield – restored Seattle’s 14-point lead, but again Beantown was able to keep the score close without losing too much time on the clock. Penalties to Seattle outside its try line allowed Beantown the choice between set pieces, and the leadership group knew where the momentum would be won: the scrum.

At the end of a series of scrums 10 minutes from the break, match official Kurt Weaver awarded a penalty try to Beantown, which was converted for a 21-14 score.

Carlyle helped lead the charge for Seattle two minutes before the break with an accurate pass from the pitch in contact, and Stockert found full back Sara Nester on the wing for the try.

Seattle was able to avoid a second penalty try just before the halftime whistle following another set of scrums in front of its posts, but was not able to escape the half with the 26-14 lead intact. Beantown lock Mary Sung drove her side within a meter of the try line and Jaimie McFarlin finished the attack by taking the ball from the ruck and over the line for a 26-19 score.

Ashley Kmiecik nearly scored twice for Seattle in the opening minutes of the second half, but Alyssa Green used her pace to take the capped Eagle winger into touch on the first attempt. The second run through a gap, however, was supported by Kala Clanton, who weaved through a few defenders from Beantown’s 22 to extend Seattle’s lead to 31-19.

Not long after Clanton’s try, the uncooperative weather appeared, causing a two-hour delay in Glendale, three weeks after delays caused havoc at the 2015 USA Rugby College 7s National Championships at nearby University of Denver.

Seattle’s scrum woes continued 10 minutes from the restart of play, as Cioffi took the ball out from under Carrie White’s nose meters from the try line to close Beantown within a converted try at 31-24. Kmiecik was able to kick the ball to touch when Weaver signaled 80 minutes had been played, calling for the championship celebrations.

New York Athletic Club finished second in the inaugural American Rugby Premiership to Life University, but ended the season with hardware with a 44-39 defeat of Austin Blacks Saturday in the 2015 USA Rugby Emirates Airline Men’s Division I Club National Championship at Infinity Park.

Timothy Howard, David Comerford, and Riekert Hatting scored tries to give the Blacks a 21-0 head start before the midway point in the opening frame, to which NYAC responded with two tries to bring the score to 21-14.

A Patrick Sullivan penalty kick helped Austin’s cause before Kyle Granby added another try to NYAC’s account for a 27-24 lead to the east coast club at halftime.

Austin held a 12-point lead at 34-27 going into the 64th minute, when NYAC closed the gap with an Alastair McFarland try. McFarland added another in the 71st minute to give NYAC a 41-39 lead, and Justin Hundley added the insurance marker with a penalty kick to bring the final score to 44-39.

Men’s Eagles and NYAC scrum half Mike Petri was given the Men’s Division I Club Smith and Forge Hard Cider Most Valuable Player award in the victory, which marks their first championship for the club since the 2012 Rugby Super League triumph.