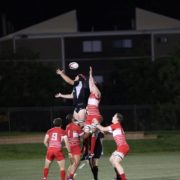 As the adage goes; “Everything is bigger in Texas”, and when it comes to rugby there is certainly no exception. The Texas Rugby Union (TRU) is home to sixty-five teams, forty-five clubs, four men’s divisions, three women’s divisions and it is the second largest Geographic Union spanning across four states (Texas, Oklahoma, Arkansas, and Louisiana).

The TRU had humbler origins. The union, who just celebrated their forty-fifth anniversary, was founded under somewhat of a shroud of mystery, with their exact origins being still up to tenuous debate. Whilst, there are some doubts to the origins of the union, there is no doubt that they have been one of the more successful unions in recent times. Success in the past half a decade has seemed to follow Texas Rugby around, both on and off the field, like a midday shadow on a warm summer’s day. Kirk Tate, the current president of Texas Rugby, says that he defines success by his personal mantra: “More people, playing better rugby”, and better rugby and higher participation have certainly been hallmarks of his tenure. This mantra was born from his playing days in Austin. Tate, in an interview with “This is Texas Rugby” divulged that he had originally been recruited by a player because Tate had a car, and the player needed a lift to training. Once he was there, due to the sports inclusiveness, he stuck with the game like a bird to a feather. He recalled his reason for staying with rugby bubbling down to an incident after his first training where players were going for a beer, Tate fumbled around looking for an excuse when one of the upperclassmen interjected: “Hey Rookie, don’t be stupid you’re with us now.” He hasn’t left the fraternity of rugby since.

Those facilities of acceptance, camaraderie and inclusiveness have all been constitutions that Tate has tried to foster during his time behind the wheel of the TRU, and it has been paying off. “We’ve been growing significantly in the last 4-5 years especially in the women’s game.” Tate proudly boasted, accrediting it to focusing on “inclusiveness”. Tate points specifically to the women’s game as an example of this. “The image of Women’s rugby is more out there and more popular…women’s success is growing.” Clubs within Texas have been quick to realize this too, with several of the traditional men’s clubs now having women’s teams. “Older women’s clubs stood alone but now men’s clubs are helping to get the women’s game to grow. But it is really the women stepping up and making it happen.”

After the growth in the women’s game Tate, acknowledges that the economic boom in Texas has also helped to grow the presence of the game: “Four out of the ten fastest growing cities in America are here in Texas. We have more young people moving here, and more young people moving here that have previously played rugby.” Further to the recent economic boom the large ex-pat population has been able to contribute to the continued growth of the game.  Evidenced by Texas’s history of playing host to a bevy of internationals including hosting Ireland, Scotland, and South Africa.

Whilst the union is growing, and the consensus amongst rugby fans in America is that growth is good, the serge in size has come with its fair share of growing pains. Tate conceding that if: “Not for the internet we wouldn’t be able to run the union” The sheer size of the Union presents the largest challenge to Tate on a daily basis, and it is why he describes his role as largely problem solving: “Travel is the biggest issue. Travel is what hinders everything, we have to ask ourselves ‘How can a group of young adults get from point A to point B to play rugby?’.”   But this is a necessary problem to have according to Tate, as he believes if they aren’t growing they’re dying. He summed up it up acutely borrowing a quote from Will Rogers: “Even if you’re on the right track you’ll get run over if you just sit there.”

Despite the challenges that he faces putting together schedules for the year he is excited for the upcoming season, and believes that it will be one of the best yet. When asked about the parts he is most excited for he had no shortage of answers in particular highlighting the Austin Huns and their quest to repeat as National Champions.  He was also interested to see the Dallas Reds RFC fielding three men’s teams and one women’s team, with former British and Irish Lion, Darren Morris, at the helm as their director of rugby he is eagerly awaiting what will happen. For the women’s competitions, he is interested to see if anyone can go toe to toe with the Austin Valkyries: “They’re the only women’s team with two teams, and they have won the competition the last several years.” In a similar vein Tate is interested to see what will happen in the D2 Men’s competition: “Who is going to step up and fill Little Rock‘s shoes, as they’ve been promoted. There is no favorite right now.”

The clubs in Texas Rugby Union play in the Red River Conference. Action in the lower divisions for Men’s and Women’s has already kicked off, however, Division I kicks off on the 20th of January for the men and on February 3rd for the Women.  It is shaping up to be an interesting and compelling season ahead.