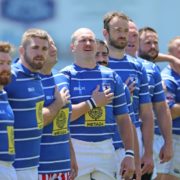 LAFAYETTE, Colo. – This week’s USA Club Rugby Saturday Six-Pack examines a half-dozen Regional Playoffs ahead of the May 20-21 National Quarterfinals and Semifinals.

Four teams from the Frontier Region will compete from April 29-30 for a spot in the Men’s Division II Round of 16 Playoffs – and they are familiar names, too. An enhanced Glendale Raptors Elite side has only boosted its D2 team. The Raptors’ second side was unstoppable in its first eight Rocky Mountain matches, remaining undefeated before dropping its final regular season game to the rival Denver Barbarians.

Glendale’s Frontier Semifinal opponent is another second side to an elite Division I club – the Kansas City Blues. After going winless in the Mid-American Division II Conference, the Blues’ .500 record was good enough for second place behind the St. Louis Bombers and a place in the Frontier Playoffs.

The hottest team in the Frontier Region is the Denver Barbarians. The Barbos have not dropped a game since mid-October and their 26-16 win over Glendale earlier this month showed the guys in green have postseason potential beyond this weekend’s Frontier playoffs. Denver has weapons all over the park, but its opponent on Saturday, the St. Louis Bombers, will want to do its best to contain a dynamic center combination in Michael Al-Jiboori and Eric Sykes.

The Barbos will hope to have better luck against the Bombers than the rest of the Mid-America Conference had against them. St. Louis went undefeated during the regular season and is only two years removed from reaching D2’s National Quarterfinals. Last year, the Bombers lost to Boulder, 48-19, in the opening round of the Frontier playoffs.

In Men’s Division III, Missouri Division winners out of the Mid-American, St. Louis Royals’ undefeated seasons earns them an opening round playoff match against Heart of America Division winners Wichita Barbarians. Neither the Royals nor the Barbarians lost a match during the regular season, but Wichita did not win all of its games. It opened its season with a 27-27 draw against the Arkansas Gryphons, but have won seven consecutive matches since then.

Only two seasons removed from D2 rugby, the Denver Highlanders might make a return to Rocky Mountain’s Division II competition sooner than later. The Highlanders have gone a combined 17-0 since dripping to Division III, including a 10-0 mark this season. Saturday’s opponent, the St. Louis Hornets, are the only team in the Frontier D3 playoffs with a loss to its name. After an undefeated fall, the Hornets have limped into the postseason by dropping three of their last four matches.

The Women’s Playoffs in the Frontier are also going down in St. Louis this weekend and will be contended by the top four teams in the Mid-America Conference: Kansas Bison, Kansas City Jazz, St. Louis Sabres, and Wichita Valkyries.

Thanks to their 5-1 record, the No. 1-seeded Sabres will play the fourth-seeded Valkyries Saturday, April 29, while the Kansas City Jazz will take on the Kansas Bison. The Jazz enter the Frontier’s postseason as the side with the most recent National Playoff pedigree. After an undefeated Mid-America season, Kansas City won both of its Frontier showdowns to reach the National Quarterfinals in Tucson, Ariz.

A hard-fought 14-game Midwest Division I regular season has left the Midwest with four teams competing for a spot in the National Quarterfinals. A reinvigorated Columbus Rugby side topped the standings table after the regular season and has drawn the Chicago Griffins in the Midwest Semifinals. Columbus more than doubled its win total from a year ago during the 2016-17 season, in thanks partially to a group of players from the Ohio Aviators latching onto the Ohio club. Included in the group of former PROs are Mason Baum, Riekert Hattingh, Taylor Howden, and 17-time capped Eagle Roland Suniula.

The Griffins not only finished fourth in the Midwest, but also competed in the 2016-17 Rugby Gold Cup, so they have played a lot of high-level rugby this season. The spring portion of their season, however, has not been kind to the Griffins. Including Gold Cup matches, they have lost eight in a row heading into Saturday’s contest against Columbus.

The other Midwest Gold Cup representative, Metropolis, will face the Chicago Lions in the other Semifinal. The men from Minneapolis placed second in both the Midwest Conference and the Rugby Gold Cup competition. They also appear to be in good form at the moment. A win Saturday against the Lions would be a fourth straight victory for Metropolis.

Also winners of three consecutive games, the Chicago Lions’ only loss in their past 10 games was a two-point defeat on the road to Columbus Rugby. Former Davenport Panther All-Americans and capped Eagles lead Chicago’s forwards and backs in Angus MacLellan and JP Eloff, respectively.

2016 Division II National Championship Finalists Detroit Tradesmen are one of four teams in the Midwest D2 Playoffs. The Tradesmen again went unbeaten against Midwest competition during the regular season. They will play Lincoln Park Rugby April 29, and Wisconsin Rugby will contend with the Cleveland Crusaders in the other semifinal.

Longstanding rivals Austin Blacks and Dallas Reds have not one, but two must-win games against one another in the Division I and II levels. The winning clubs of the last two Red River D1 titles will battle it out for second best in Texas Saturday. A one-loss Austin Huns teams took first place this year and is already into the National Quarterfinals. The winner between the Blacks and Reds will slot into second place in the conference and play the Life West Gladiators in the National Round of 16.

The Blacks fell in their first crack at the Reds in Dallas, 63-35, earlier in the season. This go around, however, will be in Austin, and the Blacks have enjoyed the recent return of Eagle prop Chris Baumann.

In Division II, Austin leads Dallas by just a single standings point heading into the final Red River match of the season. The Blacks have not been defeated this season, but their Feb. 25 game against the Dallas Reds was one of two draws to their record.

The Raleigh Venom looked like clear-cut favorites to come out of the Mid-Atlantic, but Northern Virginia’s 19-5 win over the Venom last week makes this weekend’s Mid-Atlantic Division I playoffs more interesting. Raleigh will play the Pittsburgh Angels in the semifinals, while NOVA will be up against Philadelphia Rugby. Any semifinal upsets aside, a rubber match between NOVA and the Venom with a place in the National Quarterfinals on the line would be a treat for rugby fans.

The Mid-Atlantic side that comes away with two wins this weekend will play 2016 Division I Championship finalist Chicago North Shore in the National Quarterfinals.

Both Beantown and Boston have recent National Playoff experience to boot, plus gained valuable experience by competing in this year’s Women’s Rugby Gold Cup. Still, the Renegades should not be taken lightly. They are a perfect 10-0 on the season, but the Lions gave them their best game of the season last year in a six-point defeat.

In Division II, Saturday’s Atlantic North postseason will pit Morris Pride against the Worcester Shamrocks and Providence Rugby versus Brooklyn Rugby. Winners will meet the following day in a final that holds a place in the National Quarterfinals in the balance.