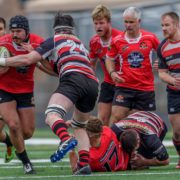 LAFAYETTE, Colo. – A draw and narrow win at this past weekend’s Rugby Gold Cup competition was enough to clinch the 2017 title for the Dallas Reds. Sitting on top of the Gold Cup standings with a game in hand of second-place Metropolis heading into the weekend, Dallas’ Friday, March 31 draw against Metropolis put the Reds in position to win the competition with a Sunday, April 2 victory over the Chicago Griffins. The Griffins didn’t make things easy for Dallas, but a last-second penalty goal gave the Reds the win and put the Gold Cup in their hands.

The Austin Blacks and Griffins got the weekend of elite club rugby started at Edina High School. As they did at the beginning of March in Austin, the Blacks blasted Chicago Friday night, 50-5.

Full back Antonio Winn dotted down twice and inside center Adam Armstrong collected seven points from his boot to help Austin to a 22-0 lead at intermission. A familiar face to USA Eagles fans recorded the first points of the second half. Chris Baumann, making his return to the Blacks, dotted down four minutes into the second half. The tighthead prop wasn’t done, however. Now leading 43-3 after Winn bagged a hat trick, Baumann got over the line again in the 79th minute. Armstrong’s following conversion split the uprights, putting a stamp on Austin’s 50-5 win.

The most anticipated match of the weekend followed the Blacks’ emphatic win. After a back-and-forth encounter in Texas separated Dallas and Metropolis by just seven points a month ago, the second matchup between the two sides didn’t disappoint.

With the home crowd behind them, Metropolis overcame tries by Dallas’ Kyle Palm, Kelly Kolberg and Spencer Cameron, as well as a spell in which it was forced to play two men down, to stay within striking distance of the Red River Conference leaders. Trailing by five points late into the fixture, prop Bryant Larson would tie the game with his first try of the competition and the match concluded as a 25-25 draw.

The Friday tie wasn’t ideal for Dallas, but still had the Reds in position to win the Gold Cup so long as they could dispatch the Griffins on Sunday. Wanting to keep bodies fresh for the final stretch of a three-team race in the Red River Conference, Dallas replaced nearly all of its starters for reserves and B-side players for its contest against Chicago.

“We got a lot of guys good exposure and showed the depth of the club can still compete beyond the top 15 players,” said Dallas Head Coach Rhys Ball.

A less experienced Reds side fell behind 14-0 after two converted tries from their Midwest opposition. Needing a spark, the Reds called on a few typical starters to lose their reserve bibs and jump into action. The substitutions made the impact expected of them, and quickly reversed the Griffins’ advantage into a 19-14 lead for the Reds.

Chicago team hung tough, however. A third converted try swung the momentum and lead back in its favor. Dallas, eager to win its first Rugby Gold Cup after Austin took last year’s inaugural honors, had one last ace up its sleeve in the form of its strong-legged fly half. A penalty was awarded to the Reds and the team called on Palm to win the game for them from 40-metes out and he managed to do just that. The last-second three-pointer by Palm slipped Dallas ahead of Chicago and awarded the second annual Gold Cup to the Reds.

The other April 2 match was a thriller provided by Austin and Metropolis. Wing Melvin Desouza notched two tries in the first half for Metropolis, while Jerome Strother Jr. did the same in the second half to fend off the Blacks, 32-29.

The 12th and final game of the 2016-17 Gold Cup will take place April 29 in Austin between the Blacks and Reds. Now that Dallas owns the rights to this year’s Gold Cup, the April 29 contest will be far more pivotal to the Red River standings that currently have the two traditional conference leaders, along with the Austin Huns, in a three-team race for the Red River title.

The Gold Cup season is over for the two Midwest Premiership representatives, but there is plenty of important rugby ahead for both. Metropolis is currently tied for second in the conference standings, while Chicago sits just behind them. Both teams are in good position to earn a spot in the four-team Midwest Premiership Playoffs, but the Cincinnati Wolfhounds are right on their heals, making end of the season fixtures against the likes of the Wolfhounds, Palmer College, Kansas City Blues and Chicago Lions crucial to their postseason hopes.