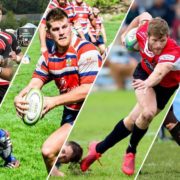 LAFAYETTE, Colo. – The second and final weekend of cross-conference competition in the 2016-17 Rugby Gold Cup comes to a head this weekend in Minneapolis, Minn. The two top dogs of the Red River Conference, Austin Blacks and Dallas Reds, leave the Lone Star State for the Midwest where they will match up with the Midwest Premiership’s Chicago Griffins and Metropolis, respectively.

The two Texas teams proved their superiority during the 2015-16 Gold Cup, as Austin took first place ahead of Dallas on its way to a second consecutive appearance in the USA Rugby Division I National Championship. This year’s competition between two of club rugby’s most competitive conferences has taken a slightly different shape, however. The Chicago Griffins replaced the Kansas City Blues after a second-place finish in the 2016 Midwest Playoffs. Meanwhile, a Red River representative still sits atop the Gold Cup standings, but Metropolis is holding strong in second and hopes a successful weekend in Minneapolis – along with some help from the Blacks – can launch the club to first place ahead of the Reds.

The first set of cross-conference fixtures took place the first weekend of March in Austin, Texas. The Midwest sides not only had to overcome the travel to Texas but also their limited opportunities to train outdoors prior to heading south. As a result, the Blacks and Reds combined for a 3-1 record over the weekend, but Metropolis more than held its own. A late try by Dallas ruined Metropolis’ chance of a March 3 draw to open the weekend, but the men of Minneapolis did not let that dampen their spirits ahead of the March 5 match against Austin. Wing Melvin Desouza dotted down twice and Metropolis earned a 32-12 road win over the Blacks to earn a weekend split against Red River’s best.

The two pairs of conference rivals enter the second leg of the Gold Cup coming off contrasting results. Chicago and Metropolis were harshly welcomed back to the Midwest Premiership. Playing their first conference games since November, the Griffins could not beat Kansas City at home, losing to the Blues, 41-22, while Metropolis traveled to Palmer College and lost, 23-19.

“A lack of consistency hurt us. I don’t think we stuck to the game plan enough to beat a team like Palmer,” explained Metropolis Head Coach Nate Osborne. “They’re a hard team to beat on the road, and I think they were more enthusiastic than us.”

Like Metropolis, Chicago is fielding a much younger side than it is used to, and it has come with some growing pains.

“Cleaning up our set piece execution and playing our pattern also should lead to more favorable results,” said Griffins President Charlie Jacobson. “While we haven’t achieved the early spring success we were hoping for, we feel that small issues with execution that can be easily corrected will have us back on the right path.”

On the contrary, both Texas clubs showed good form in the Red River last week before shifting their focus to the Gold Cup. Dallas went to Houston and toppled HARC, 62-7, while Austin was in Dallas where it doubled-up the Harlequins, 52-26. Still, as well as the Blacks and Reds have been playing this season, the two clubs are keeping an eye on key players nursing nagging injuries.

Austin has been continuously hit with injuries since the New Year and has been testing players from its DII and DIII sides all season. Those opportunities will continue this weekend with plenty of youngsters making the trip to the Midwest.

“Sometimes when you give young guys a chance they surprise you and that’s been the case this year,” said Blacks Head Coach and occasional fly half Tane Jericevich.

Regardless of the strength of the team making the trip north, Austin is very motivated by the opportunity to challenge itself over the weekend, as well as build camaraderie from the lengthy trip.

“We’re excited for the Gold Cup competition, the opportunity to travel and bring a group of boys together for some team-building and play a bit of rugby.”

It is a similar situation in the Reds’ camp. Five key players in the Dallas lineup are fairly banged up. A few DII players have been called up, and while the limping regulars are making they trip, the hope is that they will be lightly-used reserves Friday night against a Metropolis team that deserves the Reds’ full attention.

“They play a physical game of rugby and they play very well,” Reds Head Coach Rhys Ball noted of Metropolis. “They’ve got a big forward pack that likes to go forward, and they’ve got some good, fast backs.”

Dallas will counter with longtime danger man Kelly Kolberg on the wing and loose forward Chad Joseph, who Ball says is “probably the most outstanding player we have and a complete open side flanker.” Additionally, captain and lock Jonny Heron and powerful center Jake Campey are also in tremendous form.

The Blacks and Red are both gunning for two wins this weekend, but are being understandably cautions with their selections. The longtime rivals, along with the Austin Huns, are in a three-team battle for the 2017 Red River Championship.

The Midwest teams are not without their bumps and bruises, either. Most detrimental has been the loss of Metropolis eight man Jake Luetgers. Although expected back for the tail end of the Midwest season, Luetgers was sorely missed in the team’s loss to Palmer and will not be available this weekend due to a shoulder injury.

“He’s a big loss for us,” admitted Osborne. “He’s very dynamic off the back of the scrum, he gives us very good go-forward ball and he’s very solid in defense.”

Metropolis hopes the absence of Luetgers, who showed very well in previous Gold Cup outings, will be made up for with the availability of Jack Finigan and Peceli Rinakama – neither of whom made the trip to Texas earlier in the month. Finigan is an experienced center from the Gold Coast of Australia, while Rinakama has been a massive threat in the No. 10 jumper all season, but was unavailable to travel with the team to Texas.

The Griffins currently sit at the bottom of the Gold Cup standings, but they have their share of players the Texas teams will be wise to keep an eye on. Erik Jacobson captains the team from the second row and leads from the front with his relentless work rate, while a move to the backs has taken Scott Peterson’s game to a new level. The former eight man has found a new home in the centers and has responded with nine tries on the season. Then, of course, there is the return of 39-time capped Eagle Andrew Suniula. The Rugby World Cup veteran is back in the Windy City and running with his old club as a player and coach, but using his immense experience to feature at fly half rather than his international position of inside center.

All games at Edina High School