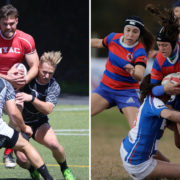 The National Semi-finals for Club 15s Rugby were played last weekend with winners moving on to their respecitve National Championships. The Club 15s Finals will be played Saturday, June 13 at Infinity Park in Glendale, CO.

The New York Athletic Club (NYAC) played a tough match against Mystic River Rugby of Boston in the National Semi-finals, with NYAC coming out on top 38-32.

On the other side of the bracket, Dallas Rugby took on the Austin Blacks to compete for a National Championship berth. The in-state rivals played a tough match with Austin coming out on top by score of 19-15. The Austin Blacks held a two-score lead for the majority of the match, fighting off a late Dallas Rugby push in the final minutes.

It was a high scoring affair between the Life West Gladiators and the Tempe Old Devils in the Men’s DII semi-finals. A total of 73 points were scored in a game that ultimately would be won by the Gladiators by score of 41-32.

Wisconsin Rugby would also play for their playoff lives against the Atlanta Old White in Sunday’s semi-final. The men from Wisconsin Rugby were too much for the Old White to handle however, winning their matchup 24-15. Wisconsin came out of the gates strong, holding a 24-8 lead into the final 15 minutes.

The Wichita Barbarians defeated Dallas Athletic 14-10, and the Tri City Barbarians of Michigan won their semi-final matchup against Old Gaelic by score of 27-19.

Old Gaelic nearly mounted the comeback of the weekend, scoring a late try in the 73rd minute to cut Tri City’s lead to 20-19. It was on the final possession however, that Tri City would pull away with a try in the 80th minute.

The Pittsburgh Angels were heavy favorites coming into the Women’s DI playoff bracket, having an opening round bye and a 38-point victory in the quarter-finals. Beantown rugby didn’t see it that way though, as they upended the Angels in a 48-17 victory. Beantown’s Emily Jones scored 18 of her team’s 48 points, and Kathleen Phelan would also scored two tries for her side.

The Seattle Saracens Women also had a first round bye and quarter-final win, but continued their success with a dominating 47-0 victory over the Santa Monica Dolphins.

The Wisconsin Women wanted to continue their state’s success in DII brackets. After the Wisconsin Men locked up their Championship birth, the women would only need to defeat the Augusta Furies of Georgia.

The state of Wisconsin did lock up two Championship performances after their women notched a 41-12 victory in the semi-finals. Grace Hovde set the pace for the Wisconsin women, scoring five tries in the match. The Wisconsin women held the Augusta Furies scoreless until the 69th minute.

It wasn’t as one sided in the Women’s DII’s other semi-final, however. The Sacramento Amazons played the Austin Valkyries in a match that would go down to the wire, but it was the Amazons who would come out on top 21-20.

The National Championships will be played June 13 and 14 at Glendale, Colorado’s Infinity Park. The matches will be broadcast live via USARugbyTV.com. Tickets for the championships can be purchased via Infinity Park’s ticketing system. Adults (13+) can purchase tickets for $10, children’s (ages 4-12) tickets cost $5 and children age 3 and under are FREE.