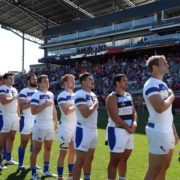 Reigning Club 7s National Champions Rugby Utah Selects have already booked their place at the Aug. 12-13 event in Minneapolis, Minn., thanks to starting off the summer with wins at Denver 7s and Heartland 7s. The big question is, who will take the No. 2 seed out of the Frontier? The Denver Barbarians or the Kansas City Blues?

Both the Barbarians and the Blues enter the Nebraska State Games qualifier in Lincoln, Neb., tied for second in the competition with six standings points. Whichever club places better at this weekend’s qualifier will move on to Nationals, while the other will be bitterly disappointed – and for good reason. Denver and Kansas City are two of the very best sevens teams in the entire country. Both clubs would have excellent shots of reaching a Club 7s Cup Final, but one team will not even be participating.

The Blues, which placed second at Nationals last year after falling to the Rugby Utah Selects in the Cup Final, appear to be just as strong as the 2016 squad with the addition of 2016-17 Men’s Collegiate All-Americans  Michael Baska, Mickey Bateman, and Reece Czarnecki.

After missing out on last year’s National Championship event for the first time in 16 years, the Barbarians are back to full strength in 2017. Longtime Denver linchpin Maximo de Achaval is again running with the Barbarians after missing the 2016 Frontier qualifying series. So, too, is Ben Pinkelman, who was preparing for the Olympics with the Eagles last summer.

The women’s representative out of the Frontier will be decided during the July 29 regional championship. The Glendale Merlins, which recently ventured to Portland where they went 2-2 at the Roy Lucas 7s, are the likely favorites at their host tournament next weekend.

Three men’s qualifying tournaments in the Pacific South have been played out, and all three were won by Belmont Shore, qualifying the boys from Long Beach to their 16th appearance at the Club 7s National Championship. Aside from Belmont Shore’s dominance, the race for qualification in Southern California has been extremely tight.

Heading into the fourth and final Pacific South Qualifier, Santa Monica 7s, the local side is in second. After finishing a disappointing fourth place in the region’s opening tournament while bleeding new players, the Santa Monica Dolphins have reeled off two straight second-place finishes. A win at their host tournament and they will return to their third consecutive Club 7s National Championship. Anything less than a first-place finish means the Dolphins’ hopes of improving on last year’s 2-4 record at Nationals will hinge on the results of both Old Mission Beach Athletic Club and the Orange County Ravens.

OMBAC would like to reverse the downward trend it has been on this summer. After reaching the Cup Final to begin the Pacific South sevens series, the club has settled for third- and fourth-place finishes in the two qualifiers since then. The OC Ravens are currently fourth in the region and stand four standings points behind Santa Monica. The Ravens have been solid this summer in one of the country’s toughest sevens competitions, but will need to at least reach the Cup Final Saturday to have a chance to earn the club’s first trip to Club 7s Nationals.

The Pacific South women’s series is already completed with two-time sevens National Champions San Diego Surfers claiming the region’s No. 1 seed, and the Tempe Ninjas earning the No. 2 seed for the club’s second appearance at the Club 7s National Championship.

Unlike the competitions in the Frontier and Pacific South Regions, both the No. 1 and No. 2 seeds in the Red River are up for the taking at this weekend’s Cowtown 7s in Fort Worth, Texas.

Adding additional suspense to Red River’s fourth and final qualification tournament is the current three-way tie at the top of the region’s standings table. The Austin Blacks, Austin Huns, and Dallas Red have each won a qualifying event. Similarly, each has one second- and one third-place finish to its name, as well. Assuming no team from the region makes a surprise run to the Finals Saturday, the two teams of the three that are tied for first that end up playing for Cowtown’s Cup Final will appear in the Aug. 12-13 Club 7s National Championship.

All three teams are relying heavily on club stalwarts that have helped their respective clubs to Red River titles in 15s over the past three years. Still, they have also brought on fresh legs from the college ranks to improve their chances of qualifying for Nationals.

The Huns have liked what they have seen out of Kutztown All-American wing Vetekina Malafu, while the Blacks and Reds have benefitted from the transfers of a few standouts from Arkansas State. The Blacks have Red Wolves Nicholas Abreus and Sione Fangaiuiha on their roster, and Dallas is getting quality minutes out of Arkansas State loose forward and Texas-native Austin Bush.

The two women’s Red River seeds to Nationals were decided early in the summer, as 2015 Club 7s National Champion American Rugby Pro Training Center booked the No. 1 seed in the region and the Austin Valkyries fought their way to the No. 2 seed.