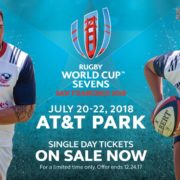 Prices for single-day tickets start at $108, plus taxes and fees, for opening day of the tournament on Friday, July 20. All single-day tickets are located in the Field General Admission section, providing spectators with up-close views of all the action at both ends of the pitch. Located in the lower bowl, alongside the Coca-Cola Fan Lot, these seats provide an ideal option for the most energetic, colorful and enthusiastic fans.

“Single-day tickets give local Bay Area fans the flexibility to come and experience a World Cup and enjoy rugby sevens without locking themselves into the full three days of festivities,” said Rugby World Cup Sevens General Manager, Rosie Spaulding. “Friends can buy tickets and sit together without having assigned seats, allowing the opportunity to move around throughout the day. We have a limited number of these tickets available though, so we encourage fans to make their purchases soon. Don’t miss out on this once in a lifetime opportunity to experience the first-ever Rugby World Cup Sevens played on U.S. soil.”

The tournament will bring together the world’s top 24 men’s and 16 women’s teams, from over 25 nations, for three days of intense competition. New Zealand will try to retain the men’s and women’s titles from the 2013 Moscow Rugby World Cup Sevens. 2016 Olympic Games gold medal winners, Fiji (men), and, Australia (women), are also expected to contend for the title. A new, innovative format has also been introduced for the tournament next year, ensuring that every single match is critical for teams looking to progress to the final stages.

“The in stadium entertainment will complement the action on the pitch and provide something fun for everyone,” continued Spaulding. “Part of the culture of rugby sevens is the celebratory atmosphere and you can expect some fans to dress up in costume, similar to Bay-to-Breakers, to support their favorite teams. It’s the type of sports celebration and fandom that meshes perfectly with the spirit and culture of the Bay Area. It will truly be a one-of-a-kind event.”
Rugby Sevens made its debut at the Olympic Games in Rio de Janeiro in 2016, and the ongoing success and growth of the HSBC World Rugby Sevens Series, including the HSBC Las Vegas Sevens every year, has moved the sport into the global spotlight as it continues to grow beyond the traditional rugby heartlands.