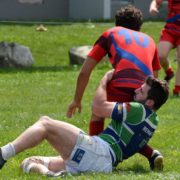 It was opening weekend for the teams in the Atlantic North and some teams already look in mid-season form. Men’s teams from the Empire and New England Unions  got underway, while the women’s competitions will start in September.

Empire Men’s Division II: New Jersey:
Only one game was played in the New Jersey pool this weekend. The Union City Mud Turtles, kicked things off with a bang against the Montclair Norsemen.  It was an emphatic victory after a tightly contested first 40. In the first stanza, there were five lead changes and the score was at a deadlock twice. However, in the second half the Mud Turtles, outscored the Norsemen, 28-5.  The Mud Turtles winning, 50-27.

New England Men’s Division II:
Both teams from the New England’s Men’s Division II 2017-18 final got their new campaigns off to a winning start this weekend. The Champions, Newport, sailed by Portland Rugby, 54-10. Newport ran out to a 19-0 lead early on and continued to suffocate their opponenets from there. They were led in attack by Elliot Hagan, who scored a brace of tries.

Last year’s New England runner-up, the Mystic Barbarians came up against their semifinal opponents, Boston Irish Wolfhounds and dominated from the first whistle. The Barbarians shot out to a 36-14 lead at halftime and continued to pile on the points in the second. Final score, 67-26.

Empire/Midwest Great Lakes Division II:
There was nothing close about the opening round of games in the Great Lakes pool. The lowest margin of victory came in the Pittsburgh Forge, Syracuse Chargers game. The Forge were able to steer themselves to victory, 46-7. Cleveland Crusaders had similar fortune against the Rochester Aardvarks, winning, 60-0. The final game of the weekend, in the Great Lakes, saw Buffalo Rugby dispose of South Buffalo Rugby, 84-17.

The Danbury Mad Hatters squandered a, 14-10, half time lead to the White Plains D3 side; eventually succumbing, 29-21. White Plains scored 19 unanswered points to open the second half, building an unsurmountable lead.  Dario Arango, was the man of the moment for White Plains, contributing 19 points to his team’s total.

Upstate:
The games weren’t as close further North. The four games in the Upstate pool saw each game settled by at least 19 points. The biggest win of the weekend came from a local derby in Buffalo. It was Buffalo D3 that took the bragging rights over South Buffalo D3, 90-5. Elsewhere, the Ken-Ton Misfits saw out Southtowns Saxons, 33-7, the Rochester Colonials took care of the Genesee Creamers, 36-10 and the Binghamton Barbarians went past Rochester Aardvarks D3, 34-15.