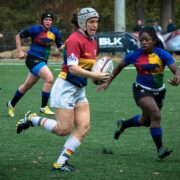 Evidenced by Friday’s semifinal win, Atlanta had one of the more robust supporters sections in Marietta throughout the Championship weekend. If not for the locality, for the team’s play. Against Berkeley All Blues, the Harlequins were quick off of the line and opportunistic with their offense and transitions. In a much tighter match with ORSU, they were required to defend for long periods at a time.

After nearly 20 scoreless minutes, center Laoise O’Driscoll ticked Atlanta’s side of the scoreboard with a penalty goal. From a 24th-minute lineout deep in its own half, ORSU went through three minutes of phase play to work its way down the field before scrum half Claire Lundy took the final crash ball over the try line for a 5-3 lead.

The Harlequins were one minute from half time – and killing off the player disadvantage caused by O’Driscoll’s yellow card – when ORSU flanker Rachel Johnson pushed her team’s lead to 10-3. ORSU could not turn more possession time into points early in the second half before full back Molly Luft was sent to the bin, however. The loss of an influential back led to the Blue Conference side conceding the match-tying try.

All eyes were on World Rugby Hall of Famer Patty Jervey three minutes into the sinning when Meredith Nelson gave the Women’s Rugby World Cup winner a flat pass on the wing. Jervey ran onto the pass with pace before returning the ball to her scrum half 10 meters from the try line to level the match at 10-10.

The ball was in ORSU hands for the majority of the remaining 20 minutes. In the final quarter of the match, ORSU went over the try line six times – five of which were either held up or opportunities lost forward – before Hannah Summers rolled over a defender to ground the ball in-goal. The try gave ORSU the victory and fifth-place title in the 2016 WPL competition.

Berkeley had been put behind the eight ball by the Harlequins early in Friday’s semifinal, and capped Eagle Katy Augustyn ensured the All Blues held the advantage first Sunday. The hooker dotted down in the second minute of the Seventh-Place Final before Ardia Kelker followed her over the try line five minutes later. The wing doubled her scoring tally in the 14th minute as the All Blues found running space across the pitch.

The Furies could not benefit from Eagle Phoebe Boone’s yellow card in the 26th minute, conceding one additional try for a 26-0 halftime deficit. No. 8 Marjorie Olney did not let her team get shut out, however, scoring her team’s only try 10 minutes into the second half. Boone redeemed herself with a try, prop Elena Edwards scored a second, and the Furies gave up a penalty try before the whistle for a 48-5 final in Berkeley’s favor.