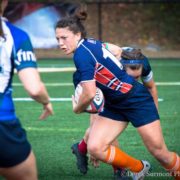 Week 3 of the Women’s Premier League (WPL) saw ORSU earn a bonus-point win in the Blue Conference, and the Red Conference’s New York and Beantown won on the road. Saturday also saw the 10th and final team, San Diego, contest its season opener.

The Blue Conference produced two single-digit decisions, and all four teams earned bonus points. WPL champion San Diego played its first game of the season and it was rematch of the 2016 final against Glendale. The Merlins traveled to southern California with two league wins behind them and a full roster.

Glendale took the first lead three minutes into the match, as wing Justine Wypych raced in for a try, which flyhalf Hannah Stolba converted. San Diego evened up approximately 10 minutes later when hooker Talia Carrasquillo dove over for a try and fullback Megan Foster added the extras, and then took a 12-7 lead into the break when wing Tia Blythe scored.

“Both teams played fast and physical, and it made for an exciting match,” Glendale co-captain Jenny Lui reflected. “They challenged us to stay connected on defense with their hard runners and ability to keep the ball alive. … San Diego has a very potent attack with threats all over the field, so we’re proud of the work we put in on defense.”

Glendale retook the lead immediately after the break, as Stolba converted her own score as well as inside center Andrea Prusinski’s try a minute later, 21-12.

“Our forward pack had a gritty performance,” Lui commended the Sarah Chobot-led pack. “Their ability to provide a nice platform and secure the ball really helped us throughout the game.”

Foster added a penalty for San Diego, 21-15, but that was the last of the scoring as the teams slugged it out for the remaining 30 minutes. Glendale has a bye week in round four, and San Diego extends its home stand against ORSU on Sept. 23.

On the other side of the conference, Chicago North Shore traveled to ORSU for its second-ever match in the WPL. The teams do have history, though, and last met in the 2014 DI Club National Championship.

“We set the expectation to come out firing and to really push the pace in the first 20 minutes,” North Shore captain Lauren Trout spoke to goals. “We were rewarded with some early tries, from [inside center Sarah] Kish. She had a fantastic game and has been a stellar addition to the team this year.”

“[Chicago North Shore] gave us a lot of pressure in the breakdown initially which slowed down our ball and made it difficult to string together our attacking phases,” ORSU co-captain Rachel Johnson explained. “We got in our heads a bit, were tentative to attack and have our goes. We re-focused at half and were determined to make our attack more direct, up the small talk and work hard for each other in contact.”

Lock Candace Mahoney-Watson and flanker Johnson both scored (14-10) and then half-time sub Te Awhina Ho Chee put ORSU ahead with a third try. Fullback Jackie Lewis converted for a 17-14 lead that held until minute 65, when Stanley kicked a penalty to tie it up. Johnson put her side ahead for good five minutes later with her second try, which Lewis converted for the 24-17 win.

“Real proud of all my teammates for making adjustments and securing the win for the Jester home crowd,” Johnson enthused. “We are ready to put in the work at practice this week and hungry for another win next weekend!”

“We are still learning and adapting to the pace of the WPL, but I’m proud of how the team has stepped up,” Trout praised her team. “We’ve had several changes from last season to this one, and so it will take us a little while to get used to those changes. That being said, I’m confident the team will only get better from here, and I’m excited to see how the rest of the season goes.”

In the Red Conference, both traveling sides returned home with wins. New York took good numbers to Atlanta and used the opportunity to blood some young players in an already young squad. “We started strong in attack, did a good job of speeding up the game whenever we could and made the most of some good front-foot possession,” New York head coach James English recapped. “Our defense was fantastic throughout the game and put the Atlanta attack under huge pressure forcing turnovers.”

“Two of the converted tries were due to handling errors on our part, errant passes that were picked up by New York, and a team like that will capitalize immediately on any type of mistake,” Harlequins vet Ros Chou explained. “All the credit goes to New York for being better at maintaining possession of the ball, utilizing tactical kicking, and taking advantage of opportunities to put the ball in the try zone. The Harlequins are continuing to improve each week and we’ve been gutting it out; this team has a lot of grit.”

“Atlanta used some impact subs who really added an extra edge to the Quins attack, but I was very happy to finish then game with a shutout,” English concluded. “It’s a real statement of intent for us. We would have liked to finished with the bonus point, but Atlanta did a great job in the second half to disrupt our attack.”

Atlanta will be the first to four games when it hosts the D.C. Furies this weekend. New York will play its third-straight game on the road when it travels to also-undefeated Twin Cities in Minnesota.

Beantown improved to 2-1 after a 17-5 win over the D.C. Furies, but it was the host that took the first lead of the match. Wing Kiera Johnson scored for the Furies approximately seven minutes in, until Beantown center Tatjana Toeldte’s try leveled the score toward the end of the first quarter. The 5-5 scoreline held until minute 56, when the visitors put Maddie Sovie away for the go-ahead try, which Allison Martin converted. Fullback Lauren Dawkins added cushion in the final minute of regulation with Beantown’s third try, 17-5. “As always I think our forwards brought a high level of physicality and go forward,” Beantown No. 8 Morgan Roberts considered difference-makers in the match. “I also think our decision-makers were smart in knowing when to use fast phases versus slow, kick for open space, call plays, etc. I actually think the advantages were pretty equally spread between backs and forwards, starters and subs. It was absolutely and 80-minute, team-wide effort.”

Beantown is done for the month of September and will host Twin Cities on Oct. 1.