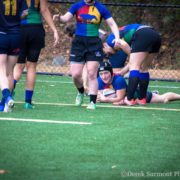 In terms of post-season implications for the Women’s Premier League (WPL), it was the San Diego vs. Berkeley match that headlined week 10. The victor would take the second Blue Conference seed to the semifinals, and join Glendale, New York and Beantown in the title hunt.

Berkeley triumphed 34-15 in the teams’ first meeting and took the first lead on Saturday with a Courtney Hendrickson try two minutes in. San Diego fullback Megan Foster added a penalty 10 minutes later, and then wing Kelsi Stockert scored her second try of the WPL season. Fosters’ conversion put the home side ahead 10-5, a lead that was claimed while a player down.

Right before the break, flanker Sam Pankey added the Surfers’ second try, and Fosters’ conversion gave the Surfers a 17-5 edge into the half. San Diego head coach Jarrod Faul pointed to Pankey and No. 8 Matelina Maluia for leading the way in terms of defense-splitting runs and keeping the team on the front foot.

“Berkeley are a team that moves the ball really well and do a great job in keeping the ball alive, so we put a lot of emphasis on our defense – closing down their attacking space quicker, making first-up tackles, two-man tackles to eliminate their momentum and re-aligning promptly,” Faul explained the team’s focus for the rematch. “Our first-half effort wasn’t up to the standards we’ve set in recent weeks; however, it was a much improved second-half defensive effort.”

The Surfers finished second in the Blue Conference behind Glendale, which traveled to ORSU for what ended up being the tensest game of the weekend.

The teams were knotted at 5-5, as ORSU’s Te Awhina Ho Chee and Glendale’s Andrea Prusinski traded tries. Merlins MVP Amandine Chatelier scored at the end of the first quarter, and Colleen Cribbs’ conversion gave the visitors a 12-5 lead that nearly held through the half. But Jesters wing Claire Lundy crossed for a try right before the break, and then hooker Adrienne Acosta dotted down the first of her two tries. When inside center Anna Symonds scored in minute 46 and flyhalf Emma Richie converted, suddenly ORSU led 22-12.

Ten minutes later the Jesters extended their lead to 27-12 with Acosta’s second score, and ORSU looked well on its way to a win as the fourth quarter ticked away.

“I’m very happy with our performance. Our offense was finally clicking and we were attacking with urgency and purpose. It gives us good momentum going into nationals,” ORSU coach Beckett Royce noted. “There were a lot of positives to take away from that game even though the final score didn’t go our way.”

And then it was Glendale’s turn to produce some offense. Reserve Juliann Tordonato snapped the second-half scoring drought with a try, and then a penalty try followed a yellow card, 27-24. The game-winner came during injury time, courtesy of lock Charlotte Thompson, and Cribbs added the extras for the 31-27 win.

“This last match before nationals gave us an opportunity to really work as a team,” Glendale coach Kitt Wagner explained. “We were able to persevere through a penalty-heavy game, two yellow cards, and were able to end the match on top. We knew that we could come back and win and we did. This match showed that we have heart, depth, and the belief in ourselves as a team.”

Heading into this weekend, the Red Conference had already been decided in that New York and Beantown are heading to the semifinals, but that didn’t stop Twin Cities from challenging New York. The Amazons took an early lead on inside center Maria Bowker’s try before No. 8 Tahlia Brody answered with the first of her three scores. Brody’s second try came after Twin Cities wing Kaelene Lundstrum dotted down her eighth try of the season, and her third came right before the break. 15-10.

“The Zons really got stuck into us the first 20 minutes and caught us a bit cold,” New York coach James English reflected. “It was our first game in the rain this year and I felt it took us some time to adjust. It was great to see the players were able to make those adjustments and problem solve as the first half went on and finished the half strong. We were able to show our strength in depth in the second half but the Zons gave us a really physical game and had some big individual performances.”

Kristen Siano, Jennifer Salomon and Shelby Lin scored in the third quarter, and Siano’s conversion gave New York a 32-10 lead. Lundstrum ended the day’s scoring with her second try of the game, but New York held on for the 32-15 win.

“We have been unbeaten in the last two seasons now in our division, but we know that nationals is a whole different challenge,” English looked ahead. “We learned a lot last year against Glendale and I think that experience should help us know what to expect in this top bracket. The Surfers are national champions, well coached and have some great players. We know we have to perform well.”

Atlanta and the D.C. Furies ended their regular seasons against each other, but there’s potential for a rematch in the post-season, as both sides will be competing in the 7th place bracket with ORSU and Chicago North Shore. The Harlequins head into this weekend’s championship with more momentum, having earned its second win against the Furies, 25-5.

It took 20 minutes for the scoreboard to light up, and it was Atlanta wing Sherri Kelly with the try-crossing honors. Hooker Laketa Sutton followed with a try before the half, and No. 8 Jenna Grygier made it 15-0 with her first try of the season.

D.C. answered immediately with a Rian Van Nordheim try, and the game sat at 15-5 for the following 20 minutes. But scores from Atlanta flankers Madeline Vara and Carolyn Mackey put the game away.

The WPL championship kicks off Friday, Nov. 10 in Tucson, Ariz., and concludes Sunday. Stay tuned for final details on match-ups or visit wplrugby.org. Tickets to the final weekend are available through wplrugby.org/nationals/.