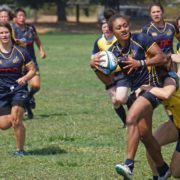 Week 2 of the Women’s Premier League (WPL) puts three more teams into motion, while the 10th team, San Diego, will wait until Sept. 16 to play its first league game. In the Blue Conference, Berkeley (0-1) hosts ORSU, and Chicago North Shore travels to Glendale (1-0), with the final match set to air free on The Rugby Channel. In the Red Conference, New York heads to Beantown (1-0), and Atlanta (0-1) is back on the road to Twin Cities (1-0).

BLUE CONFERENCE
The All Blues showed resilience against Glendale last weekend, surging in the second half to score four tries and finish with a one-point loss. Berkeley will look to build on that momentum and apply it ORSU Saturday. Watch for Christina Ramos, who played flanker last weekend but is typically a hooker, to spark some go-forward, and the high-pace connections between Bulou Mataitoga and Ardia Kelker.

ORSU is all about momentum as well, and is looking to extend its successes from last year’s fifth-place finish – the team’s highest finish in its WPL history. Return coaches Beckett Royce and San Juanita Fetuuaho were impressed with how the 2016 squad grew in mental toughness and tactical understanding, and the duo’s big challenge this year will be diversifying the team’s attack and defense.

Fortunately, the coaches have superb leaders in captains Rachel Johnson and Claire Lundy, and new talent from Oregon universities and Rugby Oregon will aid the new dimensions that the coaches seek to build.

Chicago North Shore is the lone, true newcomer to the WPL (Beantown was a member from 2009-13), and inaugurates its season against the Glendale Merlins in Colorado. North Shore has had great success under player-coaches Christiane Pheil and Lauren Trout, who now serve solely as captains, but a new trio of coaches will lead the team into a new era. Thys Wallace, originally from South Africa and a Belmont Shore alum, serves as head coach, and is supported by longtime Chicago North Shore player Lani Larson as forwards assistant and James Constantinidis as backs coach. The team warmed up with a friendly win against Chicago on Saturday.

“This match against our crosstown rival always gets the team excited, brings out the big crowds and allows the team to try out new combos and strategies,” Larson commented. “We saw a lot of innovation and tenacity in all of our team members. What truly stood out was the team’s commitment to our plan and the adjustments and corrections made as they executed.

“We’ve discovered some great depth in our team across all roles,” the coach continued. “To say we are pumped is actually an understatement. The team is studying theirs and Merlins’ game play, putting in the extra hours, and taking their learnings from last weekend to improve for this weekend.”

The Merlins will be taking the same approach into Saturday, banking lessons from a game that nearly ended in a loss. “It definitely showed us a lot of things we need to work on,” Glendale coach Kitt Wagner said after the season-opener against Berkeley. “We didn’t come out very strong; we had to shake the cobwebs off. And so those are things we’ll definitely work on once we get home.

“We were able to play every single person, and everyone got at least 15 minutes,” the coach added. “That’s great because it shows that we’re able to bring a side that we trust from start to finish. And we have even more at home who will round out our WPL side.”

There were some key players missing in San Jose last weekend, but that allowed new talent and those promoted from the DII team to get good minutes.

RED CONFERENCE
New York will break in its season against Beantown, and this great rivalry between two Northeast powers will play out in Boston.

“We are excited about this fall WPL here at New York. The club has made good progress the last couple of seasons and we are keen to build on this momentum. But a fresh year brings fresh challenges and that’s very much the case for us,” New York head coach James English explained. “Our club has a very different look this fall. It’s younger, less experienced but it’s hungry to test itself.”

Eight players retired after last year’s third-place finish, and a couple of long-term injuries, including No. 8 Evi Ashenbrucker, have placed more emphasis on the youth of this year’s team. New York does have its two Women’s Rugby World Cup veterans returning – USA captain Tiffany Faaee and Eagle lock Alycia Washington – and they’ll be instrumental in boosting the experience of the pack.

“As we all saw during the World Cup, Tiff is an inspiring figure, a fantastic role model and embodies a lot of who we are as a club,” English praised the New York captain. “She will be joined by Harvard grad and scrumhalf Shelby Lin as vice captain.”

While New York will be answering some questions this weekend, Beantown has already had a first look at its arsenal after defeating Atlanta 39-22 last Saturday., “We had a lot of success attacking around the breakdown,” Beantown coach Kelly Seary reviewed the team’s first win of the season. “Our forwards did a great job of maintaining their leg drive and getting beyond the gain line with each phase. Atlanta has a number of dangerous runners, especially out wide. Not surprisingly, we struggled to contain them when we lost our focus on our launch and gave those runners time and space. We also let our penalty count get away from us a bit, especially in the first half. We will have to clean that up going forward.”

For Atlanta coach Phil Thiel, the Beantown loss was a good learning experience that will help prepare the team for this weekend’s game against Twin Cities.

“It was a tough loss but Beantown deserved to win as they used their big runners effectively and played a rough-and-tumble game,” Thiel assessed. “I was very happy with our creativity in attack as we put together some beautiful rugby, but Beantown was able to control the pace of the game and maintain a lot of possession, which in the end proved to be the difference in the game. Giving away 39 points is always tough as we’re always focused on being tough on that side of the ball, but the issues we had were certainly fixable, so that’s a positive.”

Since then, the Harlequins have been tweaking some defensive issues and those adjustments will be well tested against Twin Cities. The Amazons experienced some first-game missteps against the D.C. Furies, but the 48-19 victory saw some good things evolve. Watch for Twin Cities to continue to grow, especially as the traditional Blue Conference leader settles into its three-game home stand. The Twin Cities vs. Atlanta game is the only one where both teams are playing in their second match of the season.