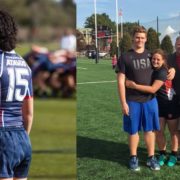 As we approach the Women’s Rugby World Cup this August, we are asking rugby fans to show their pride in the Women’s Eagles by helping us raise $100,000 to provide the team with an added month of residential training this summer. To reach this goal, Julie and Chris Prentice and the team at Atavus have pledged a $40,000 matching gift for the Women’s Eagles. As such, every dollar donated is doubled up to $40,000 thanks to these generous benefactors!

USA Rugby Trust spoke with Julie Prentice to find out a little more about the family’s relationship with rugby and their motivation behind supporting the Women’s Rugby World Cup squad.

[su_attention url=”https://rugby.swiftprocessing.io/public/usarugby/appeal?form_id=223″ text=”Double your impact by making a gift to support the Eagles on their journey to the Women’s Rugby World Cup.”]

USA Rugby Trust: Tell me your “rugby story.” How did you get involved in the game?

Julie Prentice: I’m the only non-player in the house! Chris started playing while we were in high school for Old Puget Sound Beach and went on to play at college and while he went to university in England. Our daughter Emily is a student-athlete at Harvard, while our sons both also have grown up playing the sport. The importance of keeping our family active and healthy is complemented by rugby’s unique culture of inclusiveness, fair play and respect for your competition – all attributes we hold in high regard in our family, so the game is a great fit for all of us.

USART: You mentioned your daughter plays rugby at Harvard. Please tell me a little about her relationship with the game and what it’s like for you to watch her play.

JP: Yes, Emily started playing her freshman year of high school. She wasn’t entirely sure of the sport when she started but had been inspired by our business partner and friend Waisale’s daughter, Nate Serevi, and was willing to give it a try. She was very fortunate to play for Rex Norris, who has coached high school girl’s rugby for more than 25 years. Emily fell in love with the game very quickly and within a year dropped competitive swimming. Through Emily’s high school experience, Chris was an assistant coach to Rex and Emily and his relationship grew and developed new depths as a result of their shared experience at practice and games. I didn’t realize at the time but the majority of female athletes don’t play rugby until college, so Emily quickly advanced through the high school ranks.

Emily had the opportunity to play in the 2014 Summer Youth Olympics and have current USA Women’s Eagle Sevens head coach Richie Walker as her coach. It was an amazing opportunity for her so early in her rugby career and was a real eye-opener for us about women’s rugby. There was no funding for the girls to assemble in advance of leaving for China, so we were able to get all but one player to an Atavus camp a month out and it gave them a chance to spend five days together before heading to China. Upon our return from China, we were determined to make a difference in the women’s pathway and bring equity to the sport. In working with Emilie Bydwell, we created the first-ever Girls High School All-American (GHSAA) program. To create an earlier entry point to the women’s pathway in working with national team coaches at the U20, Sevens and XVs level, we identified the need for high school girls to be playing both sides of the game and also some of the gaps on the pathway. So some of GHSAA funding was diverted to make sure there were national team opportunities at the U20 and collegiate level also.

It’s been so inspiring and fun to watch Emily’s passion and dedication to rugby grow. I’m continually impressed by what she gains by her hard work on the field and how that parlays into the classroom and all that she does. The team aspect of the sport, which welcomes girls of all shapes and sizes, empowers them to be strong physically, mentally and emotionally. I know it’s cliché but very true; the camaraderie, teamwork, challenges and recovery prepares her for life.

USART: You and Chris are the founders of Atavus. Tell me about this organization.

JP: We started six years ago with a simple, yet ambitious premise – to grow the game of rugby in America, to provide more young men and women exposure to the game we love. As a company we have expanded the original focus to also apply our knowledge base to the game football, improving the efficiency and safety of the tackle.

Growing and evolving organically on the rugby side, today Atavus builds and executes sustained, progression-based programming that provides coaching inclusive of any age, skill set or gender. Our programs include the USA Rugby Academy Powered by Atavus, customizable “Powered By Atavus” consulting services, coach development resources and the year-round Atavus Academy.

Five years ago we launched our first week-long Academy with Gordon Tietjens from the New Zealand Sevens program. During that week we began discussing the cross-over of football and the rugby style tackle. From those first discussions, Atavus Football was conceived. In 2015 we launched our products which provide modern, effective and data-driven solutions to coaches at all levels of football, from youth to the NFL. The company’s proprietary Atavus Tackle System™ provides coaches, parents, athletes and administrators with professional services, data, intelligence and proven coaching solutions.

USART: You, Chris and the team at Atavus recently pledged to match up to $40,000 for the Women’s National Team as they approach the Women’s Rugby World Cup this August. What inspired you to make this gift?

JP: It’s time to step up for women’s sports! With a daughter playing at the collegiate level, female Atavus staff who currently play/coach on national teams and 40% of our camp participants being female, there were multiple personal reasons to support the team. Early on, as a company we established supporting women and girls playing rugby as one of our foundational goals. As anyone around me knows, I carry my soap box with me and we felt there are times when you need to put your money where you mouth is and this felt like one of those moments. Our goal was to show support for the World Cup team and encourage and inspire others to do the same. And lastly, we are incredibly supportive and respectful of USA Rugby’s new CEO Dan Payne.  He deserves the support of the U.S. rugby community and will be successful if we all get behind him.

USART:What do you see for the future of rugby in the United States?

JP: The future of rugby in the U.S. is bright. Given an already heavily saturated American sports landscape, it will take time, but once a stone starts turning like the game has, it becomes unstoppable. Women and girls play a critical role in this growth. We need to encourage both boys and girls to start this great game at younger and younger ages.  We then need to encourage young adults to stay in the game past middle school, high school and after college. This requires a growth in coaches, administrators and clubs/teams. We will hit critical mass when a generation of kids look themselves in the mirror and see a rugby player first and a soccer or basketball player second. At this point we will have coaches who grew up playing rugby coaching their own kids and the size of our youth athlete population will drive us forward.

USART: What do you think is the best way to grow rugby in America?

JP: From our earliest days, we have worked hard to create partnerships to leverage greater outcomes than if we acted alone. During the recent USA Sevens Rugby week in Las Vegas, we scheduled a dinner that included ourselves, Dan Payne, Rob Cornelius, Robin and Kristin Reid, Tony DiProse and Jason Leonard. There was no agenda, just good friends sharing a meal. Imagine our success if every day USA Rugby, Atavus, EIRA, USA Sevens, the Harlequins, the RFU and the other U.S. based rugby development companies worked together to grow the game across our country?

There is much passion and opportunity to get involved. I’m excited about the growth of youth segment, as we need a solid and large base of young girls and boys to feed the pipeline at the elite level.

As the number of youth rugby athletes grows, we need to expand the number of administrators, referees, coaches, etc. I am of the Pele soccer era. When I was a kid, you signed up to play soccer through your local Boys and Girls Club. My friends’ dads were the coaches each year, and they had never played soccer in their life! But there was an infrastructure and resources in place, that provided them with drills, schedule, etc., that made them willing to coach. We need to replicate that for rugby to ensure the game is approachable, safe and fun for all new players and coaches.

USART: Why do you choose to support our national teams through donations to USA Rugby Trust?

JP: USA Rugby Trust is the right vehicle to support our national teams. The Trust is nested underneath USA Rugby and its sole purpose is to support growth of rugby in the USA.  At Atavus we have partnered with the Trust to help provide scholarships to athletes participating in our USA Rugby Academy programs.  It provides a way to direct a gift for a specific passion and purpose – which is what women’s rugby is for Chris and me.

USART: Do you have any favorite rugby memories you can share with us?

JP: I can’t pick just one, but if I had to point to ones that are formative to our family they would start with our two younger sons’ first international friendly when they were 7 and 9 years old playing in Canada. The boys had been playing against each other for the last three years and this was their first chance to play against an opponent that wasn’t their teammate. I distinctly remember the whole team wearing hugely oversized “Serevi” jerseys with Waisale’s famous number 6 on the back. The look on the faces of the Canadian families when they were trying to figure out why #6 and more importantly why all the kids wore the same number was very memorable! Next would be the 2015 World Cup at Twickenham. With all three of our kids being equal fans and supporters, this trip made for a family affair. And lastly, I would remember our trip to New Zealand with the Kent Crusaders girls high school team in April 2016. We spent 10 days traveling and playing teams, all the while the girls were immersed in New Zealand culture living with families from around the Whakatane area. The great part about the game, and one key reason why we’re so passionate about opening the sport to more and younger girls (and boys), is that these few anecdotes demonstrate the unique nature of rugby, bringing people and cultures together to participate in a healthy, respectful and global game. We hope through our support we are creating similar opportunities for other families.

[su_attention url=”https://rugby.swiftprocessing.io/public/usarugby/appeal?form_id=223″ text=”Support the Women’s Eagles. Make a contribution to the team today, and your impact will be doubled as a result of the Prentice’s matching pledge.”]